In Mexico City, PBI maintains continuous dialog with federal and state authorities located in the Federal District, as well as with the diplomatic corps,  the UN Office of the High Commissioner for Human Rights and the Delegation of the European Commission. PBI also meets with governmental and non-governmental delegations that visit Mexico who have a specific interest in gaining a better understanding of the human rights situation in Mexico from the perspective of PBI's international accompaniment work. 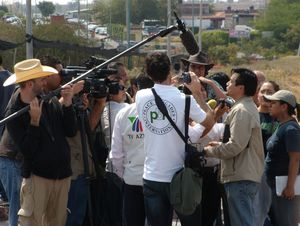 Francisco Cerezo, from the Cerezo Committee, in an interview with the press the day of the liberation of his brothers Hector and Antonio, February 16 2009.

Following the detention of their three brothers Alejandro, Hector and Antonio in August 2001, Francisco and Emiliana Cerezo began to fight for their freedom and soon became victims of harassment and threats. PBI began to accompany Emiliana, Francisco, and Alejandro Cerezo Contreras, members of the Cerezo Committee in February 2002 at the request of the Mexican League for the Defense of Human Rights (Limeddh). The Cerezo Committee continues to work on behalf of other political prisoners in Mexico.

Emiliana Cerezo Contreras states that the amount of harassment has decreased  since they have been receiving international accompaniment: "This is one of the reasons that we went to PBI: since it is an international organization that has a support network in other countries, we find that it is difficult for the Mexican government to make an attempt against us without having to pay a high price in the eyes of the international community that is watching the human rights situation in Mexico. I think that this is the importance of PBI."

Alejandro Cerezo was exonerated of all charges and freed in March 2005, and on February 16, 2009 Héctor and Antonio Cerezo were freed from prison, after having completed their sentence. PBI accompanied Francisco, Alejandro and Emiliana Cerezo during the liberation of their brothers.