Committee for the Integral Defence of Human Rights Gobixha (Código-DH)

The Integral Defense Committee for Human Rights `Gobixha´(Codigo-DH) is a civil society organization that offers legal aid as well as psychological support and medical attention to victims of human rights violations, whilst working towards the access to justice and the fight against impunity. Codigo-DH was founded in January 2011, created due to the closure of the November 25 Liberation Committee which had previously been accompanied by PBI since the end of 2009 due to the constant threats and attacks that the staff received for their legitimate work in the defense of human rights. Despite having received precautionary measures from the Inter-American Commission on Human Rights (IACHR) since July 2007, the aggressions against the members of Codigo-DH and their family members have not ceased. For this reason PBI continues to provide international accompaniment to the organization.

In 2011, Codigo-DH opened a regional office in San Pedro Amuzgos, which provides the educational and legal advice that contributes to the recognition of and respect for human rights in the region, the awareness and the education of local authorities and the training of human rights advocates. In 2013 Codigo-DH suffered further attacks when it began to support communities from the Isthmus of Tehuantepec who are demanding their right to free, prior and informed consultation to the apparent imposition of a wind farm. The community human rights defenders in San Dionisio del Mar and Álvaro Obregón have suffered various attacks and threats for their activism in the defense of their lands and territories. PBI is monitoring the security situation and the granting of the right to consultation through its accompaniment to Codigo-DH in the Isthmus.

Alba Cruz is the coordinator of the human rights judicial area for Codigo-DH. In spite of the wide recognition of her work both in Mexico and at an international level, the human rights lawyer has been threatened and harassed due to the cases that she has been representing in recent years. Alba is currently taking on the collective denouncement and search for justice of more than 30 former prisoners that were arbitrarily detained, tortured and sexually abused during the 2006 conflict. She demands justice in the cases of extrajudicial killings of activists committed in 2006 and denounced the arbitrary detention and mistreatment of members of the movement # Yosoy132 in 2012.

Alba has managed some very high cases, including the `Oaxacan Case´, in which the Supreme Court of Justice of the Nation made responsible the then state government for the human rights violations during 2006-2007 in Oaxaca. Alba was also Juan Manuel Moreno´s lawyer, who was released in 2010 after 16 months of wrongful imprisonment for the murder of American photographer Brad Will in 2006. In addition, Alba is the defense lawyer for Marcelino Cooache, who presents one of the emblematic cases of human rights violations in Oaxaca. The union leader was illegally detained and tortured in April 2009, but has still not obtained justice or reparation. Marcelino and his family continue being victims of harassment, threats and attacks despite being beneficiaries of precautionary measures from the IACHR since 2009.

Alba has been victim of constant death threats, aggressions against her and her family, harrassment and defamation of her work in the promotion of human rights. PBI therefore, continues to advocate for the full and consistent implementation of her precautionary measures . 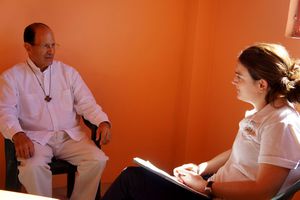 Father Solalinde with a PBI volunteer

The Catholic priest Father Alejandro Solalinde Guerra and the team at the Hermanos en el Camino migrant shelter in Ciudad Ixtepec offer humanitarian aid and legal assistance to migrants, coming mainly from Central America. In 2010, the National Human Rights Commission (CNDH) registered 11333 cases of kidnappings of migrants. The grave containing the bodies of 72 migrants, found in 2010 in the state of Tamaulipas, is emblematic of the risks that the migrant population face. Migrant persons rights are limited by the law and often find themselves in a situation of extreme vulnerability to organized crime and government corruption.

Threatened for defending the most vulnerable

The defense of the human rights of migrant persons that Father Solalinde, who won the National Human Rights Prize in 2012, carries out along with his team, has been widely recognized both in Mexico and abroad. On the other hand, it has made them a target for attacks, defamation and death threats. Since 2008, the workers of the shelter have reported numerous cases of corrupt municipal, state and federal officials, as well as the kidnapping of migrants, which has in turn exposed the shelter to aggressions and intimidation from organized gangs and public officials. Therefore, on the 23 April 2010, the Inter-American Commission on Human Rights granted precautionary measures to Father Solalinde Guerra to assure his life and physical integrity.

Father Solalinde and his colleagues in the Hermanos en el Camino shelter, just like other migrant shelters in the country, continue to suffer death threats. PBI, therefore, expects the Mexican State to implement the correct means to guarantee the security of those who defend the rights of migrants. 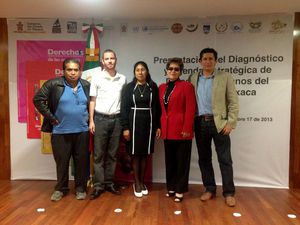 The “Bartolome Carrasco Briseno” Regional Centre for Human Rights (Barca-DH) is a non-governmental human rights organization that was founded from the local church community with the purpose of promoting and defending the human rights of the communities of Oaxaca. In October 2010, PBI accepted the request for international accompaniment with a focus on supporting Minerva Martinez Lazaro, coordinator of Barca-DH, and the priests Martin Octavio Garcia Ortiz and Wilfrido Mayren Pelaez (more commonly known as Father Uvi), who are both board members of the organization.

Since Barca-DH was established in 1992, the NGO has constantly faced surveillance, threats, and defamation campaigns as well as, on various occasions, direct attacks and judicial proceedings against it for its work in the promotion, defense and education in human rights. Moreover, Barca-DH is leading an international campaign for the release of Alvaro Sebastian Ramirez, prisoner from the Loxicha region, and carrying out other human rights projects with communities in the Sierra Sur and Central Valleys regions of Oaxaca. Barca-DH advises the Zaniza, Teojomulco and San Lorenzo communities, providing information on the environmental impact and the right to prior, free and informed consultation regarding the mining project affecting this zone.

The coordinator of Barca-DH, Minerva Martinez Lazaro, has faced numerous risks and threats for the work in these high-profile cases. Father Uvi, a recognized human rights defender in Oaxaca for his work in the pacification of different conflicts, is currently one of the driving forces for the resolution of the conflict affecting the Santiago Amoltepec, Elozochitlán de Flores Magón and San Lorenzo Texmelucan communities. He has suffered years of harassment, threats and defamation campaigns, among other abuses, due to his work in the defense of human rights. Father Martin, for his part, has centered his work in supporting the communities of San José del Progreso that are resisting the exploitation of gold and silver from mines owned by the company Cuzcatlan. After a defamation campaign was held against him and having received severe harassment, the priest denounced having been attacked in June 2010. A few days later, he was detained and accused of the killing of two people during a confrontation in San José del Progreso. Subsequently, he was released without charges but has not received compensation for the abuses and violations that he suffered. 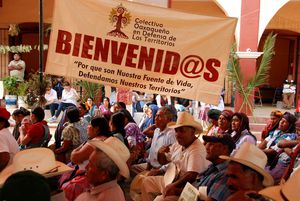 Community meeting in Magdalena Teitipac. The community is advised by EDUCA. PBI volunteers can be seen in the background.

Services for an Alternative Education (EDUCA) is a non-governmental organization founded in 1994 in the Oaxaca City. It encourages democracy and development in Oaxacan communities and promotes justice, equality and social participation in order to succeed in raising the quality of life of marginalized sectors of the population in Oaxaca.

PBI began to accompany EDUCA in August 2013 as a result of the risk faced by community defenders who received advice from the organization in regards to the right to claim prior, free and informed consultation at the apparent imposition of megaprojects on their lands and territories. The risks are high for those who report inadequate processes of consultation and the negative impacts caused by the extraction and infrastructure projects, not only in Oaxaca, but throughout the country. PBI stresses the importance for the Mexican government to take the right steps to guarantee secure conditions for the legitimate activism of these community defenders.

San José del Progreso and the Coordinator for the United Communities of the Valley of Ocotlán (COPUVO), Magdalena Teitipac and Paso de la Reina are just some of the cases that EDUCA accompanies and where activists are threatened for the work they carry out. In 2013 EDUCA published the Diagnosis on Attacks of Community Defenders and the Role of Public Human Rights organizations in Oaxaca, whose recommendations must be implemented to ensure the protection of this vulnerable population.