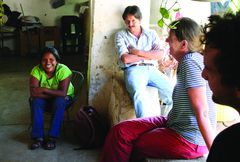 Peace Brigades International (PBI) México would like to express it's concern for the security of the leaders of the Organisation of the Indigenous Me´phaa People (OPIM) Obtilia Eugenio Manuel y Cuauhtémoc Ramírez Rodriguéz after a letter containing death threats was delivered to their house on November 28. The letter also refers to the cases of OPIM members Inés Fernández Ortega and Valentina Rosendo Cantu, who were raped by members of the Mexican army in 2002. In October the Inter-American Court of Human Rights ruled that the Mexican Government had failed to provide justice for the two indigenous ladies.

PBI has accompanied both Cuauhtémoc and Obtilia, as well as other members of the OPIM, since 2005 when they first began to receive threats. Since then, as the OPIM has campaigned for justice and development, its members have lived a constant situation of insecurity. This reflects a wider repression of social organisations in the region of Ayutla de los Libres, Guerrero, where the OPIM works. Fellow indigenous campaigners Raúl Lucas Lucía and Manuel Ponce Rosas, leaders of the Organisation for the Future of the Mixtec People (OFPM), were kidnapped, tortured and murdered in February 2009.