PBI Mexico: Mexico challenges the sentences of the Inter-American Court in the Cases of Valentina Rosendo Cantú and Inés Fernández Ortega 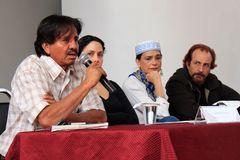 In a press conference which took place last week in the ProDH Centre, the Organisation of the Me'phaa Indigenous People (OPIM), Just Associates (JASS), Centro por la Justicia y el Derecho Internacional (CEJIL), Servicios y Asesorías para la Paz, Association for Women's Rights in Development (AWID) and the Tlachinollan Human Rights Centre denounced the lack of will shown by the Mexican State to fulfill the sentences given by the Inter-American Court of Human Rights (CoIDH) in the cases of Valentina Rosendo Cantú and Inés Fernández Ortega.

In their press release <media 7374>Mexico challenges the sentences of the Inter-American Court in the Cases of Valentina Rosendo Cantú and Inés Fernández Ortega</media>, Cejil, Tlachinollan and the OPIM criticise the Mexican Government, arguing that their recent requests to the Court show that “Mexico questions testimony and the participation of soldiers in the rape and torture of two indigenous women despite the Inter-American Court’s sentences”.

A group of women who have all won the Nobel Prize have written a letter in support of Valentina and Inés. Read the letter <media 7372>here</media> (Spanish).

PBI UK have launched an appeal, via BBC Radio 4, in which award-winning actress Julie Christie read Valentina's story. Read more about the appeal at PBI UK's website, or listen to the programme here (English).