"The serious acts of violence against people who defend ESCR and the high levels of impunity that accompany these acts are seriously concerning", ESCR Committee

International attention given to economic, social and cultural rights defenders

12 months have passed since the last time the United Nations Economic, Social and Cultural Rights (ESCR) Committee reviewed Mexico, therefore the most recent review that took place in March of this year was extremely welcome. Within the review, the Committee identified various obstacles to the full enjoyment of economic, social and cultural rights in Mexico, such as the high levels of poverty, a minimum wage that is not enough to provide dignified living conditions and the lack of implementation of international norms that fully respect the right of indigenous communities to prior consultation in order to gain their free, prior and informed consent surrounding economic projects in their territories.

In addition to the traditional observations that this entity is usually concerned with, such as dignified housing, the health system and labour rights, the Committee focused on important political measures that the government has to implement, the lack of which has an impact on the full enjoyment of economic, social and cultural rights.  For this reason the Committe emphasised the need to fight impunity in order to guarantee that human rights, both political and ESCR are not violated.

The Mexican government has 18 months to reply to three points that were prioritised in the Committe´s report, the first of which emphasises the urgent need to implement protection measures for people who defend economic, social and cultural rights.  In their report the Committee highlights that "the serious acts of violence against people who defend ESCR and the high levels of impunity that accompany these acts are seriously concerning".  In their recommendations, they indicate that the State must guarantee the implementation of the Defenders Protection Law, as well as the Federal Protection Mechanism. The report also urges the government to adopt preventive measures and to exhaustively investigate attacks against defenders. 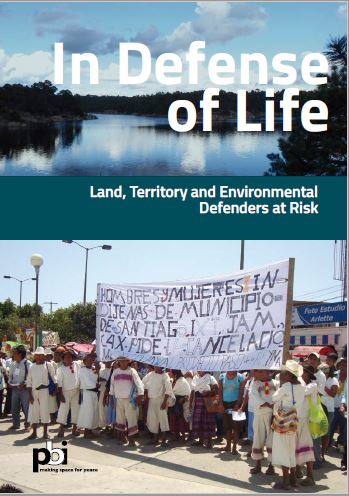 People, groups and communities that defend ESCR come into conflict daily with large economic interests due to their activism in terms of territorial defense as well as their struggles for labour rights.  They are people who defend the right to health, dignified housing, education and other rights that are needed to develope fair societies.  They are people or communities that have already been, or are at risk of being affected by large-scale economic projects, to which they are in opposition.  They are people who accompany the communities at the front line of these territorial conflicts so that they understand their rights and the mechanisms available to demand they are respected and protected by the government.

Despite the range of activities they carry out, the different topics they work on and the strategies they use to achieve their goals, what defenders have in common is the situation of risk that they live in each day because of their work.  People who defend ESCR throughout the world are targets of smear campaigns, harassment, threats and physical attacks that put them and their work at risk.

In December 2017, PBI published "In Defense of Life", a publication that quotes the alarming statistics of attacks against people who defend land, territory and the environment in Mexico, highlighting the importance of their work and urging the Mexican government to fullfill its responsability not only to prevent attacks and protect defenders, but also to investigate the crimes carried out against them, identify the perpetrators and design holistic strategies that attack the structural causes of the violence that they suffer.

Historically PBI has asked the government, diplomatic corps and international organisations to publically recognise the crucial work that defenders undertake in the fulfillment of all human rights.  With this in mind, we welcome the public pronouncement from the Federal Protection Mechanism for Human Rights Defenders and Journalists that recognises and condemns the attacks against land and territory defenders in Mexico.

The Espacio_OSC that follows up on the implementation of the Federal Protection Mechanism highlighted in their public communiqué that "the Mechanism´s declaration of good will is just the first step in assuring the fulfillment of all human rights of those who defend land and territory".  They urge the government to follow up the public pronouncement with actions that guarantee holistic and adecuate protection.

These types of pronouncements are fundamental in guaranteeing the security for defenders and to raise their profiles.  However, it is urgent that they go hand in hand with public policy that guarantees concrete protection measures.  These policies should recognise the risks that defenders live in as well as the economic and political interests against them in order to design protection measures that respond to their situation of risk.

PBI supports the recommendations of the ESCR Committee which emphasise the important role defenders play in the fullfillment of ESCR, their protection needs and the unfavourable enviornment they find themselves in in Mexico.