In the State of Guerrero, PBI accompanies the following people and organizations. 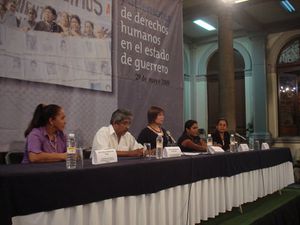 Civil Monitor of Police and Security Forces of the Montaña

Tita Radilla, vice-president of the Association of Relatives of the Detained, Disappeared, and Victims of Human Rights Abuses in Mexico (AFADEM)

Organization of Women Ecologists of the Sierra de Petatlán (OMESP)

Organization of the Indigenous Me'Phaa People 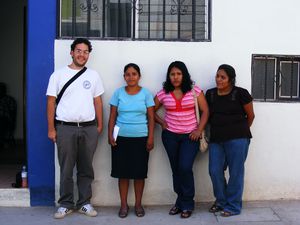 Obtilia Eugenio Manuel, Valentina Cantu and Ines Ortega from the OPIM accompanied by a PBI volunteer in 2010.

At the request of the Tlachinollan Human Rights Center, Peace Brigades International has accompanied Obtilia Eugenio Manuel, Andrea Eugenio Manuel, Cuauhtemoc Ramirez Rodriguez, Ines Ortega and Valentina Cantu members of the Organization of the Indigenous Me'Phaa People (OPIM), since February 2005 in Ayutla de los Libres, Guerrero and in the nearby communities of Barranca de Guadalupe, El Camalote, and Barranca de Tecuani. The OPIM was founded in 1998 by Obtilia Eugenio Manuel and Cuauhtémoc Ramírez Rodríguez. The organization has been committed to the defense and promotion of indigenous people's rights in the Costa Chica region of Guerrero. (See the <media 3851>interview with Cuauhtemoc Ramirez, secretary of the OPIM</media>)

The accompaniment began following a series of death threats to Obtilia Eugenio Manuel shortly after she denounced the militarization in the region. Members of the OPIM continue to be victims of threats, harassment and incarceration. Five members of the OPIM were adopted by Amnesty International as prisoners of conscience, four of them were released but Raul Hernández still detained. (See the <media 3850>interview with Raul Hernández, prisoner of conscience</media>). Among the agressions against members of this organization, the raping of the Me’phaa indigenous women Valentina Rosendo Cantu and Ines Ortega Fernandez in 2002 stand out. (See the <media 5977>interview with Valentina Cantu</media>). Currently, the Inter-American Court of Human Rights (IACHR) is analyzing their cases.

With the special bulletin, Silenced: Violence against Human Rights Defenders in the South of Mexico (may 2009) PBI intends to provide information regarding the particularly difficult situation faced by the OPIM's members and others human rights defenders in Ayutla.

Members of the Tlachinollan Human Rights Center in a reunion with former UN High Commissioner for Human Rights.

The Tlachinollan Human Rights Center is located in Tlapa and Ayutla, Guerrero, and focuses on the indigenous municipalities located in the Montaña and Costa Chica regions of Guerrero. About 300,000 residents of the 600 communities in this region belong to the Mixtec, Nahua, and Tlapanec indigenous groups. This indigenous region is highly marginalized and is among the poorest in Mexico. Given the serious human rights violations in the region, Tlachinollan works to defend the rights of these indigenous groups. PBI has accompanied Tlachinollan since December 2003.

Civil Monitor of Police and Security Forces of the Montaña, Guerrero 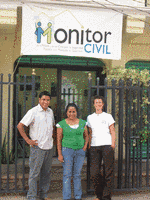 Rommel Chacan and Matilde Perez, members of the Civil Monitor in front of their office with a PBI volunteer in 2009.

The Civil Monitor is a non-governmental organization based in Tlapa de Comonfort and founded in 2008 by the Tlachinollan Human Rights Center, the Institute for Security and Democracy (INSYDE), and Fundar, a Center for Analysis and Investigation. The goal of their work is to work toward a respect for fundamental rights in the actions of the police and army units in the state of Guerrero, especially in the Montaña region. In order to do this, the Civil Monitor documents individual reports of abuse, and works to identify good and bad practices by police and security forces. PBI began accompanying the Civil Monitor in June 2009. 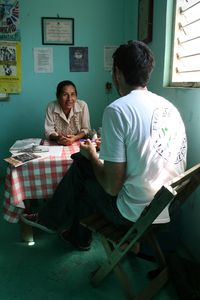 Tita Radilla in her office with a PBI volunteer

The PBI Mexico team began to provide accompaniment to Tita Radilla, vice-president of the Association of Relatives of the Detained, Disappeared, and Victims of Human Rights Abuses in Mexico (AFADEM ) in August 2003. This organization belongs to the Latin American Federation of Associations for Relatives of the Detained-Disappeared (FEDEFAM). AFADEM, together with the Mexican Commission for the Promotion and Defense of Human Rights, has filed complaints against the Mexican government with the Inter-American Commission on Human Rights (IACHR) for the forced disappearance of Tita's father, Rosendo Radilla Pacheco.

On Tuesday 15th of December, 2009 the IACHR published its sentence against the Mexican State in the case of Rosendo Radilla, disappeared after being detained in a military road block in Atoyac de Alvarez, Guerrero, in August 1974.  Learn more about the sentence.

PBI: What does the Court’s judgement on your father’s case mean for you and your family?

Tita Radilla: It is a triumph. For many years we have tried to make the Mexican State investigate and bring this case to justice, and – above all – find my father. It is very satisfactory to think that today the Mexican State can be forced to conduct the investigation. Unfortunately, our mother is no longer with us, but it is wonderful to know that there is now hope for an investigation into what happened in this case, and in the cases of other people detained and disappeared. (...)<media 5978>Download the complete Interview with Tita Radilla (pdf)</media>

Watch Radilla Case: An Open Wound from Mexico's Dirty War on You Tube

Organization of Women Ecologists of the Sierra de Petatlán(OMESP)

At the request of SOS Bahia and the Tlachinollan Human Rights Center, the PBI Mexico Team began to offer international accompaniment to the Organization of Women Ecologists of the Sierra de Petatlán, A.C. (OMESP) in August 2005.

On March 2, 2005, Felipe Arreaga was declared a prisoner of conscience by Amnesty International for "facing an unjust trial." After spending 10 months in the local prison in Zihuatanejo, he was absolved of the charges against him and liberated on September 15, 2005.

Felipe’s peaceful struggle to prevent excessive logging of local forests ended on September 16th, 2009, after being hit by a mini bus. Our most heartfelt condolences to Felipe’s wife, Celsa, and his friends and family. Reed The Life and Death of a Mexican Environmental Prophet.