PBI Mexico presents its report: Human Rights Defenders in the State of Guerrero. 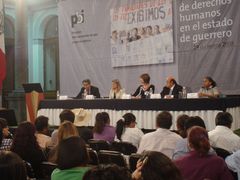 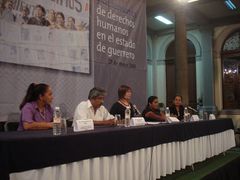 On May 29, 2008, the Peace Brigades International Mexico Project presented Human Rights Defenders in the State of Guerrero. Cases of resistence and initiatives from Mexican civil society regarding the promotion and defense of fundamental rights in Mexico. The event took place in the Club de Periodistas in Mexico City.

Following a welcome by PBI Mexico Coordinator Sergi Bach, the first part of the event began with a speech by Ms. Liliana Valiña, ad-interim representative in Mexico of the United Nations High Commissioner for Human Rights. Minister Alejandro Negrín, Director of Human Rights for the Department of Foreign Affairs, Juan Alarcón Hernández, President of the State Commission for the Defense of Human Rights in Guerrero and July García Silverio, representing the Department of Public Security in the State of Guerrero, also spoke during the event.

The second part of the event began with a presentation about PBI´s work in Mexico since the middle of the 1990´s including a spotlight on the problems that human rights defenders currently face in Guerrero. Afterwards, organizations that receive PBI accompaniment spoke including: Abel Barrera Hernández, Director of the "Tlachinollan" Human Rights Center; Tita Radilla Martínez, Vice-president of the Association of Relatives of the Detained, Disappeared and Victims of Human Rights Violations in Mexico (AFADEM); Celsa Valdovinos Ríos, President of the Organization of Women Environmentalists of the Sierra de Petatlán; and Obtilia Eugenio Manuel, Secretary of the Organization of Indigenous Me´phaa People.

The event was attended by several human rights organizations from Guerrero and from Mexico, as well as by representatives from embassies, international delegations, and Mexican Authorities.

The publication can also be found on our website in English, Spanish and German.