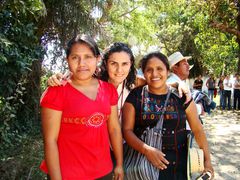 Alejandra González Marin is a psychologist who has worked for the Tlachinollan Human Rights Center for four years. She works closely with the legal department to provide psychological attention to victims of domestic violence and victims of socio-political violence, and provides counseling to organizations such as the OMESP and the OPIM who face legal persecution. Much of the population that she works with are indigenous and have little financial resources. On July 11, 2008 two PBI volunteers met with Alejandra and talked to her about her work with Tlachinollan.

Can you tell us a little bit about your work?

“I coordinate a program that provides psychological attention to victims of domestic violence, sexual violence, and victims of socio-political violence who have suffered from serious human rights violations. In the past I worked with environmentalist Felipe Arrega who was imprisoned for a fabricated crime, and I am currently working with the five members of the OPIM who are also imprisoned for a crime they did not commit. I also work with OPIM Secretary Obtilia Eugenio Manuel who faces constant threats and harassment.

The psychosocial work that I carry out is very complicated, since talking about justice in Guerrero is relative - those who suffer from human rights violations often do not attain justice for these crimes, and I have to counsel victims with this in mind.”

What are the psychological effects of legal persecutions against human rights defenders?

“There are several different effects, some of which are different for the prisoners than for the rest of the organization. The five prisoners continually ask themselves:  Why? Why me? Why now? One part of the work is helping them understand that they were imprisoned because they fought for their rights. It is an unfair situation for them, but once they understand why they were imprisoned, they will have more strength to face their imprisonment.

The underlying goal behind legal persecutions is to debilitate the organization. Even though the organization feels strong, organized, and with real capacities, they have to understand that they are not strong and that the State has a lot more power. As soon as the organization stops doing their human rights work, the State has achieved its goal. An organization faced with this situation often has to completely stop what they are doing and focus on freeing their prisoners. Both the educational and psychological departments in Tlachinollan work with organizations so that they can find ways to continue their human rights work, and not focus all of their efforts on just the detainees.”

“Not only are the prisoners affected by their incarceration, but the prisoner’s family is also destroyed.  Having a father or a husband in prison means that the person who provided the main source of income is no longer able to provide for the family. Women must become more active in the organization, even though they may not have participated before. At the same time, rumors are spread amongst the communities which make people scared to participate in the organization. These rumors spread a negative image of the OPIM, propagate the idea that people who participate in the organization are delinquents, and that fighting for your rights means you will go to jail. These rumors can successfully destroy the organization´s ability to further develop their work.”

“Legal persecutions also affect the leaders of the organization, such as Obtilia Eugenio, OPIM Secretary, who has been harassed, threatened, and constantly watched. I think that Obtilia's situation is a good example of violence towards women. Obtilia is a woman, an activist, and a human rights defender. The state focuses on her because of her five conditions: she is a woman, a mother, indigenous, poor, and an activist. Those that harass her think that Obtilia could stop her work at any time because she is concerned about her children, her family, or her husband.  However, they are wrong because the convictions of a woman like Obtilia are stronger than her exhaustion. Without a doubt the constant harassment has affected her and this is why I work with her.”

And what are the long-term psychological effects?

And do you see effects in society?

“Yes of course, PBI and Tlachinollan are also working in Ayutla! The government must use the media to justify their actions. They must influence the opinion of the population, and this is dangerous for organizations like ours in the region. The people often say,  These people are the ones behind the delinquents from the OPIM.”