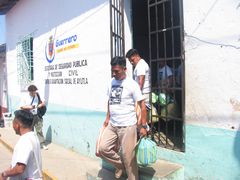 The four prisoners of conscience from the OPIM exit the local prison in Ayutla. Photo: Tlachinollan Human Rights Center

"Amnesty International today welcomed the decision to drop the charges against four Indigenous human rights defenders, who have been imprisoned for nearly a year in Guerrero State, but called for the release of the remaining defender who is still being held on fabricated charges.

“It is time for the authorities to recognise that the prosecution case against these Indigenous defenders is politically motivated and based on unreliable and fabricated evidence in order to punish them for their legitimate work promoting the rights of their community,” said Susan Lee."