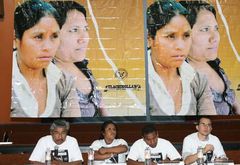 The 27th of May, the Inter-American Court of Human Rights carried out the public audience of the case of the indigenous Me`phaa Valentina Cantú, victim of torture and rape by Mexican soldiers in 2002, when she was 17 years old. The case is the second of two brought forward by members of the Organisation of the Indigenous Me`phaa People (OPIM) and both Inés Fernández Ortega (IACHR Audience, April 15th) and Valentina Rosendo Cantú (IACHR Audience, May 27th) have been searching for justice and compensation for eight years. Before the court, lawyers representing the indigenous women argued that their cases show the recurrence in Mexico of problems such as the lack of access to justice for female victims of violence, abuses brought about by the increasing lack of civil control over the Mexican army, and the sistematic persecution of those who organise themselves to defend indigenous rights. Representatives of the Mexican state reiterated their denial that it was indeed members of the mexican army who raped Inés Fernandez, in spite of the fact that in the audience itself they accepted that the mexican authorities had carried out a deficient investigation of the facts of the rape.

PBI has accompanied the OPIM, Inés Fernández Ortega and Valentina Rosendo Cantú since 2005, and a represantative of PBI was present in both audiences.

PBI: How do you see the response of the Mexican State in the audience?

¨What stood out in the Mexican Government´s response is that they recognised the irregularities in the investigation. So this recognition means that the Mexican State, before the Court, accepts that they violated human rights by not carrying out an effective investigation. There, you see a cler contradiction in the State's position because they accepted their responsibility for not having carried out an effective investigation, but at the same time they strongly denied that it was soldiers who committed the crime. What is a shame is that the state insists upon denying the existence of the rape, and insists on questionning the integrity of Inés in these forums and this is what creates the most concern for us." <media 6152>Download the entire interview (pdf)</media>