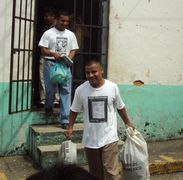 On Friday August 27, PBI accompanied Raúl Hernández Abundio, member of the Organisation of Indigenous Me´phaa People (OPIM) and prisoner for more than two years, as he was released and declared innocent by the Mixed Judge in Ayutla de los Libres.

PBI has accompanied members of the OPIM since 2005, and Raúl and his lawyers from the Tlachinollan Human Rights Centre throughout his imprisonment. Of the five members of the OPIM who were unfairly imprisoned in April 2008 and declared Prisoners of Conscience by Amnesty International, Raúl is the last one the be exonerated. His case is a clear example of the ongoing phenomenon of the criminalisation of human rights defenders in Mexico, documented in the recent PBI bulletin, Human Rights Defenders Behind Bars.

<media 6746>Download the press release from the UN Office of the High Commissioner for Human Rights in Mexico, regarding the liberation of Raúl (pdf)</media>