Valentina and Inés' search for justice has lasted eight years 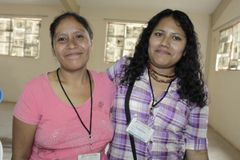 PBI urges the Mexican State to implement the IACtHR rulings promptly and thoroughly and calls on the international community to monitor the implementation process. PBI also calls upon Mexico to renew its efforts to guarantee the safety of Inés Fernández, Valentina Rosendo and their relatives, bearing in mind that they have been the target of systematic attacks seeking to silence their legitimate demands. The IACtHR has already acknowledged their situation of danger and issued protection orders (‘provisional measures’) for Inés Fernández and 107 fellow human rights defenders in Guerrero on 9 April 2009. In February 2010 the Court also issued provisional measures for Valentina Rosendo and her daughter.

The IACtHR ruling confirmed that Inés Fernández and Valentina Rosendo were raped and tortured by members of the Mexican Army in 2002 in their communities located in Guerrero state, southern Mexico. Their complaints have been investigated by the military authorities, who failed to identify the perpetrators and left the crimes unpunished. The prolonged denial of justice in their own country forced the two women to seek justice at international level. After so many years, the rulings of the IACtHR confirm the injustice they suffered and support the demands of Inés Fernández, Valentina Rosendo, their families and all those who provided the legal advice and campaigned on their behalf.

In the rulings, communicated to the plaintiffs and their lawyers on September 30, the IACtHR ordered the Mexican State to provide comprehensive reparations and guarantee the safety of the two women and their families, as well as demanding that civilian authorities carry out an effective investigation into the rapes and bring those responsible before a civilian tribunal. The rulings also ordered disciplinary procedures against those officials who hampered the investigations with their negligence or who denied the right to adequate medical attention for both women. The IACtHR demanded that the Mexican State provide reparation of damages and the guarantee that the same will not happen to other women, by implementing adequate medical services for victims of sexual violence, by training officials and by creating a specific protocol of action for such cases.

Echoing the Rosendo Radilla sentence issued by the IACtHR in November 2009, these rulings reiterate the obligation to reform the Mexican military justice system to prevent military tribunals from taking over the jurisdiction of cases of human rights violations committed by the military against civilians.

For more information on the rulings, in Spanish, please see the online information point for the Prodh Human Rights Centre at centroprodh.org.mx/sididh2008/. The rulings themselves are published and available to the public on the Inter-American Court of Human Rights website: www.corteidh.or.cr. For background information on these cases and the state of insecurity for human rights defenders in the municipality of Ayutla de los Libres, Guerrero, see PBI’s special bulletin <media 2578>Silenced</media>.