PBI Mexico: British Lawyers call for action on impunity in Oaxaca and Guerrero 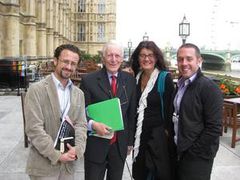 Santiago Aguirre, of Tlachinollan Human Rights Centre, with members of PBI UK and PBI Mexico at the House of Lords

On July 15 2010, in the House of Lords, Lord Brennan hosted the launch of the Bar Human Rights Committee’s (BHRC) new report on the protection of human rights defenders and the rule of law in the Mexican states of Guerrero and Oaxaca. The independent report encourages Mexico to do more to protect its human rights defenders and bring to justice those who commit abuses against them.

A packed room of MPs, Lords, high-profile members of the legal community and representatives of non-governmental organisations, listened intently to a summary of the report, which reflects the findings of a delegation of lawyers from the UK, the USA, Canada and Germany, who visited Mexico last December. Mexican human rights lawyer Santiago Aguirre (Tlachinollan Human Rights Centre) and PBI Mexico staff also shared their professional perspective of the situation on the ground.

The BHRC report criticises the climate of impunity in which human rights abuses exist at the state and municipal level in Mexico, leading to a lack of trust and credibility in the justice system and undermining the efforts to address organised crime, insecurity and poverty.

The report acknowledges that the use of the military in combating the narcotics trade has exposed the civilian population to an increased risk of serious human rights violations and impunity for military offenders. It urges Mexico to accept international recommendations and implement a legislative reform which would harmonise the Code of Military Justice with international standards and ensure that alleged abuses by the armed forces against civilians be taken out of military jurisdiction.

The report makes several recommendations, and highlights the importance that Mexico implements protective measures for at-risk human rights defenders, as recommended by the Inter American system. The delegates noted some commendable efforts by the Federal Government and the report encourages the prompt implementation of the 2008 public security and criminal justice reform programme.

Several of the human rights defenders who PBI work with are mentioned in the report, such as Alba Cruz and <media 6963>Valentina Rosendo Cantú</media>, as are regions, such as <media 2578>Ayutla de los Libres</media>, where PBI has offices. The report also covers highlights the <media 5815>criminalisation</media> of human rights defenders. The BHRC hope to launch a Spanish translation of the report, named Recalling the Rule of Law, later this year.