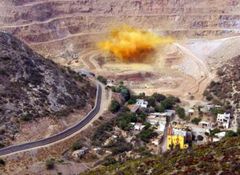 In spite of the fact that numerous indigenous communities and campesinos of the Montaña and Costa Chica regions of Guerrero are strongly opposed to the mining exploitation projects being carried out there by foreign companies, there is evidence that some exploratory projects are already taking place without a proper consultation of the local people. PBI works with several human rights defenders in these regions.

According to recent stories in the media,(1) it is believed that in 2011 three mining projects will be developed in the area: one project, known as Corazón de Tinieblas, by the English company Hochschild Mining, which would affect the communities of San Luis Acatlán, Zapotitlán Tablas, Malinaltepec and Tlacoapa; and two by the joint Mexican/foreign company Camsim Minas S.A. de C.V., called the San Javier Project and La Diana, in the territories of Lliatenco and Malinaltepec. Both companies have already begun their explorations in these municipalities.(2)

The Regional Coordination of Community Authorities (Coordinadora Regional de Autoridades Comunitarias, CRAC) – Community Police Force of the Costa Chica/Montaña region which covers more than 60 communities (and which appeared in PBI’s special publication on human rights defenders in the state of Guerrero) – has expressed its opposition to these projects and has declared that, as well as not consulting the people of the region, these initiatives will lead to concerning and grave environmental consequences such as the river water being contaminated by the chemical substances used to separate minerals.(3) Parts of the regions affected are recognised by the United Nations Development Programme as biosphere reserves containing species of flora and fauna threatened with extinction.

Members of civil society organisations have also shown their disapproval towards these projects. Amongst others Abel Barrera Hernández, Director of the Tlachinollan Human Rights Centre – accompanied by PBI since 2003 – asserts that just as in the case of the Carrizalillo mine in the municipality of Eduardo Neri in 2007, the mining companies trying to install exploitation projects in the region have corrupted proceedings in order to obtain the consent of the campesinos. What is more, Barrera denounces that “the state and federal governments don’t care what the people think, what they really care about is generating business with companies, regardless of whether these are indigenous lands, or whether the result is a bigger conflict than the one which already exists in the Montaña region because the rights of the indigenous people are continually threatened”.(4)

PBI is concerned that these problems could generate greater conflict in the region and increase the risk which already exists for the human rights defenders working in the area.

For more information about the consequences of the mining companies in the region, see the website of the Community Police (CRAC):  www.policiacomunitaria.org

For more information about the history of the mines in Guerrero, see information on the Carrizalillo case on the Tlachinollan website (Spanish):  www.tlachinollan.org/casos/carrizalillo_win.html

For more information on the CRAC and the Carrizalillo case, see PBI’s special publication Human Rights Defenders in the State of Guerrero: cases of resistance and initiatives from civil society regarding the defense and promotion of fundamental rights in Guerrero