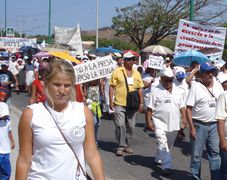 PBI attends the “Day of Mobilisation for the Defence of the Rio Verde”, 14th March 2011 © PBI - Mexico 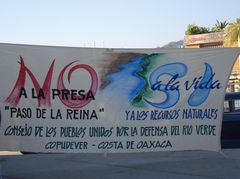 Oaxaca. – Rio Verde is one of the most bio-diverse and extensive river basins in the State of Oaxaca. For decades, the Federal Electricity Commission (CFE) has been carrying out studies to analyse its potential and to determine the feasibility of the construction of a multi-purpose hydroelectric dam known as “Paso de la Reina”.

The CFE plans to construct a dam wall in order to contain the water from Rio Verde, thus creating an artificial reservoir in the municipality of Santiago Jamiltepec which is located just above the Paso de la Reina community. Depending upon the final design of the project, land belonging to mestizo and Afro-Mexican as well as Mixteca and Chatinas indigenous communities in the townships of Santiago Jamiltepec, Tataltepec de Valdes, Santiago Tetepec, Villa de Tututepec de Melchor Ocampo, Santiago Ixtayutla and Santa Cruz Zenzontepec could be greatly affected. The proposal currently being contemplated by the CFE could generate more than 1500 GWh, equivalent to the electricity consumption in the entire State of Oaxaca in 2007. (More information, in Spanish: Aprovechamiento Hidráulico de Usos Múltiples Paso de la Reina, Noticias, 16/03/2010)

The hydroelectric project has generated a backlash in the region, and many inhabitants of the communities, cooperatives and municipalities affected came together in 2007 to form the Council of United People for the Defence of Rio Verde (COPUDEVER), with the aim of defending the river, the land and its natural resources.

The rejection of the dam is due, in large part, to a series of concerns regarding the severe impact on the eco-system, the cutting of water supply, the loss of land and the risk of potential flooding if the dam wall were to break, or if the floodgates were to be opened to avoid overflowing during the rainy season. Thanks to the exchange of experiences with other groups who have been affected by similar projects elsewhere, the opponents to the dam have been able identify doubts concerning the prospective benefits claimed by the CFE regarding the creation of employment and the facilitation of compensatory projects. They also criticise that the dam will essentially serve outside business interests, rather than those of the local population.

PBI attends the “Day of Mobilisation for the Defence of the Rio Verde”
On the 13th and 14th of March 2011, in the city of Pinotepa Nacional on the Oaxacan coast, a “Day of Mobilisation for the Defence of the Rio Verde”, coinciding with the International Day of Action against Dams, was organised by COPUDEVER. On the afternoon of the 13th, cultural activities were carried out including presentations, documentaries and mural paintings by local students potentially affected by the hydroelectric project. The following day around six thousand people, made up of representatives of the concerned communities, teachers from the Section 22 of the National Union of Education Workers (SNTE) as well as church groups from Puerto Escondido, marched in protest against the Paso de la Reina dam. PBI was present in these activities as an international observer.