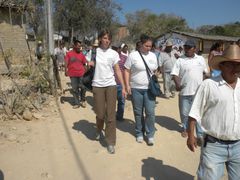 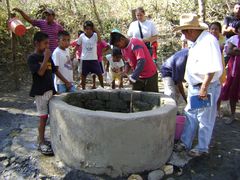 In 2006 a project called the ‘Multiple Potable Water System of Tecoanapa’ was approved in the municipality of Tecoanapa, Guerrero State. This project would make use of local, state and federal funds with the goal of creating infrastructure to provide potable water for five towns in the municipality: Mecatepec, Tepintepec, El Guayabo, Barrio Nuevo and El Carrizo. In February 2009, when the project was 85% complete, it was stalled by opposition from a group of people from the municipal seat lead by local political boss Baldomero Mendoza Castro 1 who formed an organization called the ‘Tecoanapa Water Committee’. This committee is made up of of individuals who have illegitimately administered the water resources, given that they have no legal jurisdiction to do so and do not report to any authority. According to local human rights organizations, this group has exploited the water resource, selling it to ranches, swimming pools and water purification companies in the area, and opposes its municipalization because of their personal interests. Simultaneously, drainage from Tecoanapa, the county seat, was being emptied into the river near to the five towns, contaminating the only local source of water and causing skin, gastrointestinal, eye and ear diseases in the population who used it.2

To respond to these problems the “Council of Authorities of the Five Towns of Lower Tecoanapa” was created in 2005 in order to complete the potable water project. The five towns have held public protests to demand the conclusion of the project and have participated in meetings with municipal and state authorities without results. Since February 2010 they continue protesting, in front of the Mantial las Cazuelas facilities, in order to suspend water service to the county seat until the water system for the five towns is completed. They are supported by local, national and international human rights organizations.3

In February 2010, after a broad investigation into the matter, the Guerrero State Human Rights Commission (CODDEHUM-Gro) declared that state and local authorities were violating the rights of the townspeople to water, health, and a clean environment. It recommended that the government finish the project, guarantee the citizen´s rights to water, attend to the health problems of the affected population, limit and reverse the contamination of the river, and other dispositions. The government has accepted these recommendations, but has yet to carry any of them out.4

n September 2010 the potable water system project was reinitiated, but construction was again interrupted on the 17th of September when a group of inhabitants from Tecoanapa, declared themselves in disagreement with the project and requested a signed letter from the Governor of Guerrero, Zeferino Torreblanca Galindo authorizing its construction. Since that date, the only part of the project that has continued is the internal network of pipes in each town. Only 750 meters of large tubing is needed so that the five towns can have access to potable water, but there continues to be opposition to the project by a group that insists that it is against the law and that water is already available in the towns.5

On March 17th 2011, after months of lack of intervention by state and municipal officials, and without any proposal to resolve the conflict, there was a violent confrontation provoked by citizens of the municipal seat when residents of the five towns attempted to reinitiate the project by laying the 750 meters of missing pipes themselves. The conflict left 20 people injured, 15 of whom were town residents who were hit with rocks and pipes and cut with machetes. According to witnesses, over 100 elements of the state preventative police were present at the location where the conflict took place, but they took no action to dissuade the violence and left the area. The confrontation only ended when 50 members of the military arrived at the scene, although they did not directly intervene.6

On March 30th, PBI accompanied a civil observation mission to the five towns, which went to document both the urgent needs of the population to have access to uncontaminated potable water, and the limited work that is needed to complete the project. This mission was organized by the Network of Civil Human Rights Organizations of Guerrero, The Regional Human Rights Center Jose Maria Morelos y Pavón, The Tlachinollan Human Rights Center and the Collective Against Torture and Impunity. As a result of this mission, a pronouncement will be published containing four points: A call for the next state administration to conclude the project, the cleaning of the river that passes by the municipal seat which provides water to the inhabitants of the five towns, water treatment for the drainage that comes from the municipal seat, and medical attention for those who have contracted illnesses due to drinking contaminated water from said river.7

PBI hopes that all negotiations between the five towns of Tecoanapa and the municipal and state government take place in accordance with the law, and that the physical integrity of the citizens of the five towns and their representatives be protected during the process.

For more information about the case of the five towns of Tecoanapa and their struggle for water, see the blog for the Council of Authorities of the Five Towns of Lower Tecoanapa, cincopueblostecoanapa.blogspot.com.