Two years from Ayotzinapa, Mexico is still demanding for the students to be found

Mexico City, 27th September 2016 – It has been two years now that 43 students of the all-male teacher training rural college ('Escuela Normal Rural Raul Isidro Burgos') of Ayotzinapa disappeared in Iguala, in the state of Guerrero. The Mexican civil society commemorates the day with different activities all over the country, related to the parallel demand that the students be presented alive. PBI accompanied the march of thousands of participants in Mexico City which ended with a gathering on the Zócalo, the capital's main square, where relatives of the students underscored the lack of political will shown by the Mexican government to present advances in the search and investigations relating to the case.

According to the families and the accompanying civil organizations, for almost two years the Mexican government has been sticking to the official version (“la verdad histórica” or historic truth), which holds that the disappeared 43 students were kidnapped by organized crime and incinerated at a landfill in Cocula, a municipality near Iguala. The official version has been questioned by various national and international experts, among others by the Interdisciplinary Group of Independent Experts (GIEI, by its initials in Spanish) in their final report on the case. Recently, the results of a scientific experiment equally rejected the possibility of the students having been cremated at the Cocula dump. Supported by various concerns expressed at the national and international level, the Inter-American Commission on Human Rights (IACHR) has been able to implement a monitoring mechanism for the recommendations proposed by the GIEI. This mechanism should secure the authorities' follow-up of the recommendations by the GIEI and the precautionary measure (link in Spanish) issued by the IACHR.

Notwithstanding, both at national and international level human rights organizations and other institutions continue to denounce the Mexican state for the lack of progress in the investigations. For example, the National Commission on Human Rights (CNDH, by its initials in Spanish) recently published a statement (link in Spanish) expressing that the Case of Iguala is “an open case” and that the occurred “cannot remain unpunished nor forgotten”. According to a statement (link in Spanish) of the Attorney General's Office (PGR, by its initials in Spanish), only 8 of the 47 recommendations proposed by the CNDH are entirely attended by the PGR, while 29 are about to be considered.

Amnesty International warns that the government's response to the case “shows its imprudent attitude regarding human rights”, as mentioned in the statement (link in Spanish) published by this organization on September 21th. “From not having prevented the attack against the students, to disdaining complaints about the way the research has been handled, the Mexican authorities have done everything in their power to obstruct justice and to protect its own reputation”.

On the same date, the European Union published a document which underlines the importance for the Mexican government to solve the Iguala case and other emblematic cases in order to maintain its credibility. According to this report, “government credibility has been seriously damaged, both within and outside Mexican borders, particularly after the publication of the final report on the Iguala case by the GIEI, which turned down the official explanation of the death of the 43 students and casts doubts about the research process”.

In a visit to the rural college “Raúl Isidro Burgos”, in Ayotzinapa, representative of the United Nations Office of the High Commissioner for Human Rights in Mexico Jan Jarab, expressed (link in Spanish) the Office's admiration and empathy towards the students' relatives, who in the past two years have played a key role in assuring continuity of the investigation process. While applauding the fact that new lines of investigation have recently been opened, Jarab stressed that the case has not been clarified and that it cannot remain unpunished, adding that the Office will closely follow the process. Finally, he highlighted (link in Spanish) the importance of being able to count as soon as possible on the creation of a general law on disappearance which must contain the victims' opinions and voices. 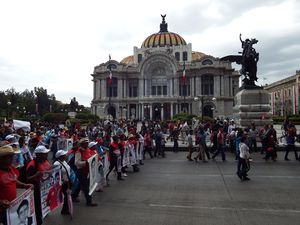