We want to bring social movements together, to face the effects on communities together, sharing common experiences and feelings

Protecting our territory begins with the bodies of its inhabitants

The Committee for the Integral Protection of Human Rights Gobixha (Código-DH) is an organization located in Oaxaca de Juárez, which works to contribute in the re-installation of human and community rights from indigenous and Afro-mestizo groups; it also offers free legal counseling, health and psychological care to victims of human rights violations, and fosters access to justice and promotes the fight against impunity. The organization has offices in the municipality of San Pedro Amuzgos and was founded in January, 2011, superseding the Comité de Liberación 25 de Noviembre (the November 25 Liberation Committee).

The dream of the office known today as just “Human Rights” in the community of San Pedro Amuzgos (Tzjoⁿ Noaⁿ) started with a young indigenous amuzga woman. She was a Law student who joined the social movement in 2006 which began the People’s Assembly of Oaxaca (APPO). Within this movement, the November 25 Committee was born after seeing the injustices and severe offenses against human rights. The organization’s main goal consisted in providing legal counsel to victims of illegal detentions, torture and forced disappearances.

In 2011, she decided to return to her community and with the experience she acquire while defending victims of human rights violations, started to provide legal counsel to people in her community. While working as a counselor, she met other indigenous women that were also living or witnessing violations against their human rights. This is how the office started to gain notoriety in the community, especially among mestizo and indigenous women, who constantly experience violence. They said, ‘there is a lawyer that does not charge and listens to women!’

That is how the Código-DH office in Amuzgos began, which is now also involved in the communities of Santa María Ipalapa and San Juan Cacahuatepec, communities where human rights violations are commonplace. After six years, they have successfully worked in unlawful detentions in the region, legal representation for women experiencing violence, conflict mediation and attention to the general population to file complaint cases before authorities. It’s now possible to see in the streets of the village the political muscles of the women, with marches and civic programs that have managed to incorporate different sectors, such as authorities, teachers, school administrators and others. 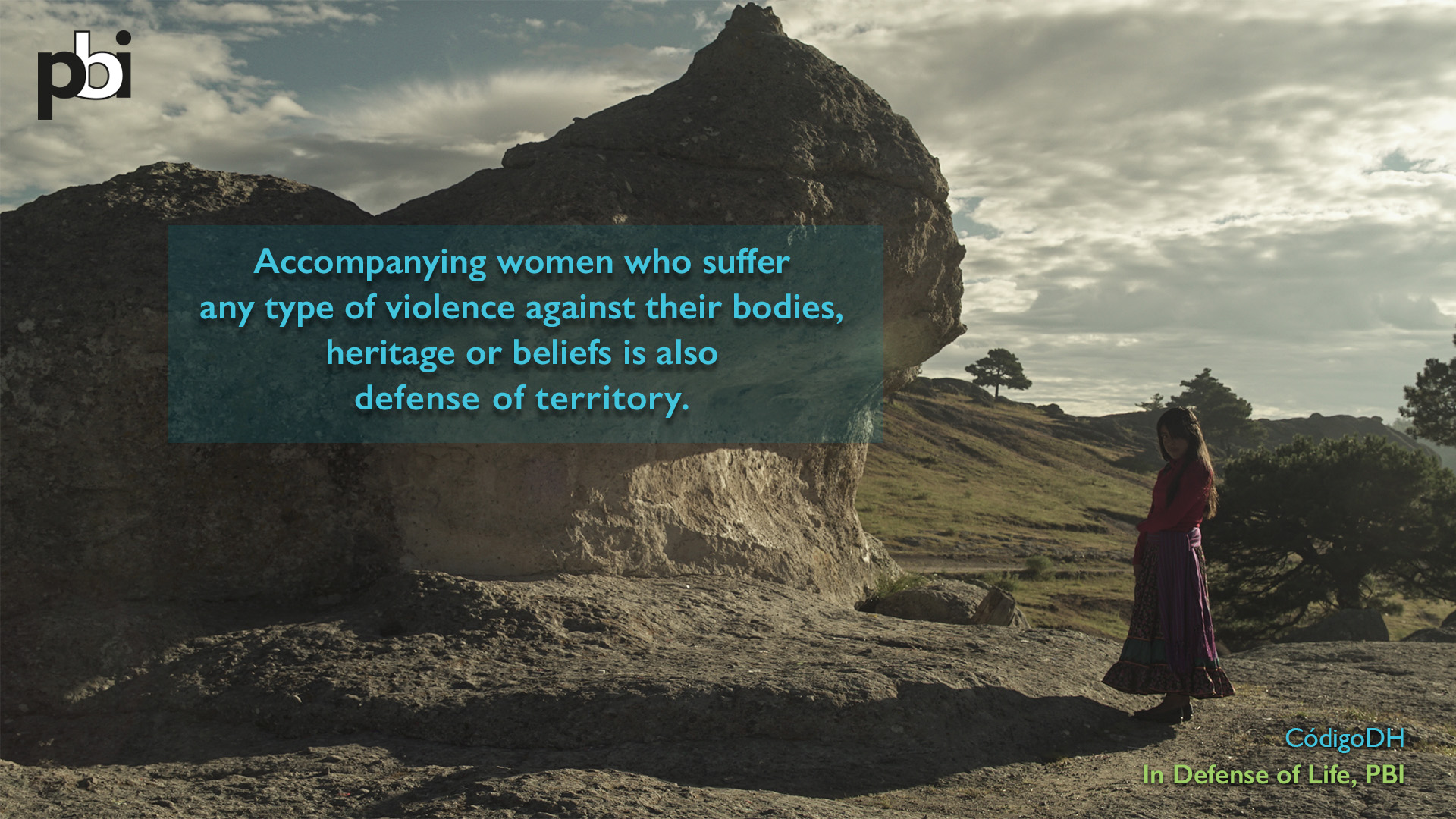 We believe that the defense of territory starts with the people living there, who are occupying a space which is part of their life. Over time, we have learnt that accompanying women who experience any type of violence, be it physical property damages or attacks on their belief systems can be considered as defense of the territory. Which is extended if we consider the geography that they inhabit and the links with their environment, the so-called bicultural anthropology, which acquires a special importance when dealing with rural farming and migrant communities in Amuzgos, in Costa Chica, Oaxaca. We propose that the defense of the territory can take place when all communities are aware of our right to have land and from that, that man and women have the right to form a family and start to see themselves as a home on a plot of land that can be used to grow food and feed themselves. ‘Having’ land means working that land.

To live peacefully with “alternatives to development” as well as “development alternatives” the base must be consulted, the community and the land must be considered and we must conclude that it is not just about improving life conditions as a means of progress, or just living with less resources: we need to progress toward the utopia of living without harming other people or exploiting nature. Currently, at a community level, wellbeing is criticized when linked to the wrongly named “development”, defining growth and consumption as progress. When measuring consumption or wealth levels, wellbeing or purchasing power are not the only parameters to consider. There are people that reject and question development by defending green and agriculture-friendly alternative projects.

Each community has its own complexities when dealing with resistance, based on their needs and what they deem to be violations of their human rights. In San Pedro Amuzgos, Santa María Ipalpa and San Juan Cacahuatepec, there are some common demands from the communities; for example, regarding exploitation of river soil, terraforming, expropriation of communal lands and cases of violence against women.

In the community of San Pedro Amuzgos and other parts of the country, human rights advocates have been defamed in the media and criminalized by public prosecutors’ offices or other government agencies with specific political interests. We consider this criminalization of the defense of human rights as a response from the government that justifies or uses offenses against human rights and call them a “necessary evil” to enforce the law without questioning their internal operational structure, methodology and procedures. Our current goal is to amplify spaces for the defense of human rights in the coastal region of Oaxaca, building citizen networks that strengthen the defense of the territory by both women and men. We want to bring social movements together, to face the effects on communities together, sharing common experiences and feelings.