"The impunity that does not end": The Cerezo Committee presents its annual report on human rights defenders in Mexico

In the last year, ACCUDEH registered 107 events that violate human rights of defenders. These 107 events affected 25 communities, 17 organizations, 47 people, 34 family members and 502 people that belong to communities or organizations. Furthermore, Cerezo Committee documented 249 arbitrary detentions – with the main goal is to disarticulate the defense and exercise of the human right to protest. In addition, 9 people were victims of extrajudicial execution and 4 people were victims of forced disappearance. The data reflects a reduction of grave violations against human rights defenders – but also an increase in the number of women that suffered arbitrary detention as well as an increase in the number of victims that do not belong to indigenous communities.

Nevertheless, the organizations show concern towards the recent events of repression in Jalisco and León, as well as in Mexico City – events which they ensure can represent a new trend of increase in the number of violations against human rights defenders, after the actual decreasing tendency.

A number of experts participated in the virtual presentation of the report: Daniel Zapico, representing the UN Office of the High Commissioner of Human Rights in Mexico, Clara Meyra representing the Rosa Luxemburgo Stiftung regional office, Santiago Corcuera, human rights expert, as well as Daniela Pastrana representing the journalist network Periodistas a Pie. Alejandro Cerezo, the ACCUDEH coordinator also intervened and the panel was moderated by Francisco Cerezo.

The report points out and concludes that there is a lack of compromise by the Mexican government with the rights of the victims that between the year 2000 to 2017 suffered grave violations to truth, justice and reparations, which perpetuates impunity – which is the bleeding ground that allows grave violations of human rights to take place against defenders. It is relevant to point out, as Clara Meyra did during the virtual event, that “democracy, justice and reparation cannot exist if violations of human rights to people who struggle for a dignified life still persist”. 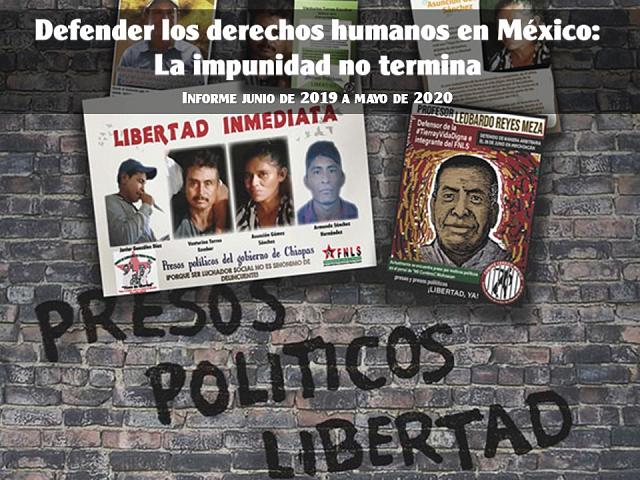 Watch the live presentation of the report here.