Relatives of missing victims in Guerrero meet with diplomatic corps

Relatives of victims of disappearance, human rights defenders and human rights organizations met virtually and members of the diplomatic corps. The meeting held yesterday, January 21, 2021, had the objective: to inform international actors about the human rights situation in the state of Guerrero, and in particular about the deepening of the disappearance crisis that the entity is experiencing, through the direct testimonies of their relatives and the accompanying organizations.

The virtual private meeting with the diplomatic corps was held because as a result of the Covid-19 pandemic, the visit to the state of Guerrero, planned at the beginning of 2020, was postponed indefinitely.

The meeting was attended by representatives of the embassies of the United States, Canada, United Kingdom, Germany, Ireland, Austria, as well as the Delegation of the European Union in Mexico.

At first, defenders from the state of Guerrero made the embassies aware of the serious situation in which human rights defenders, as well as journalists, find themselves, given the context of macro-criminality that prevails in the state of Guerrero. Juan Sánchez Gaspar, on behalf of the Popular Front of the Mountain, demanded justice for the disappearance and murder of Arnulfo Cerón Soriano; Sergio Ocampo, correspondent for the Jornada in Guerrero, explained how the exercise of journalism in the entity has become in many places impossible due to the collusion between organized crime and authorities at different levels; Teodomira Rosales Sierra, director of the “José Morelos y Pavón” Human Rights Center, explained how her organization’s accompaniment of the victims of forced displacement in the Chilapa de Álvarez region led her to receive threats from different actors, forcing her to several members of the Center to leave the entity forcibly.

In a second moment, testimonies and experiences of relatives of victims of disappearance were made known, who have formed groups to search together for their loved ones. Gema Antúnez Flores, from the Collective of Relatives in Search María Herrera, from Chilpancingo, told the diplomatic corps the situation of abandonment in which the groups of relatives of disappeared persons are found in the state of Guerrero, both in the null access to the truth and to justice, as to survive on a day-to-day basis in the midst of the pandemic. Members of the Colectivo Luciérnaga, un luz en la Oscuridad, from Tlapa, recounted how they have collectively learned to arm themselves with courage to undertake the search for their relatives, in a region increasingly controlled by organized crime.

Finally, relatives of emblematic cases of forced disappearance took the floor, to relate their demand for justice at the international level in the face of impunity in crimes committed by state actors. Tita Radilla, daughter of the defender Rosendo Radilla Pacheco disappeared by the Army in the midst of the so-called “Dirty War” in 1974, expressed her outrage at the lack of compliance by the Mexican State, 12 years after the Inter-American Court’s judgment was issued. of Human Rights. Norma González, wife of the indigenous teacher Gregorio López Alvarado who disappeared in 1996, demanded that the Mexican authorities investigate the CISEN agents who disappeared him. Doña Cristina Bautista, mother of one of the Ayotzinapa students who disappeared on the night of September 26 to 27, 2014 in Iguala, recounted the 6 years of walking by the parents of the students in search of their children and demanded the investigation of all the members of the army involved in his disappearance.

At the end of the meeting, the representatives of the embassies thanked the victims for their strong testimonies that allowed them to understand the reality that exists in the country, outside of Mexico City, and showed their concern about the difficult situation of the victims. From the Human Rights Center of the Mountain “Tlachinollan” and Peace Brigades International-Mexico, we express our gratitude to all the people who participated in this meeting and we will continue to inform various international actors about the crisis of disappearance of people that Guerrero is going through, until the security and guarantee of human rights is a reality in the state. 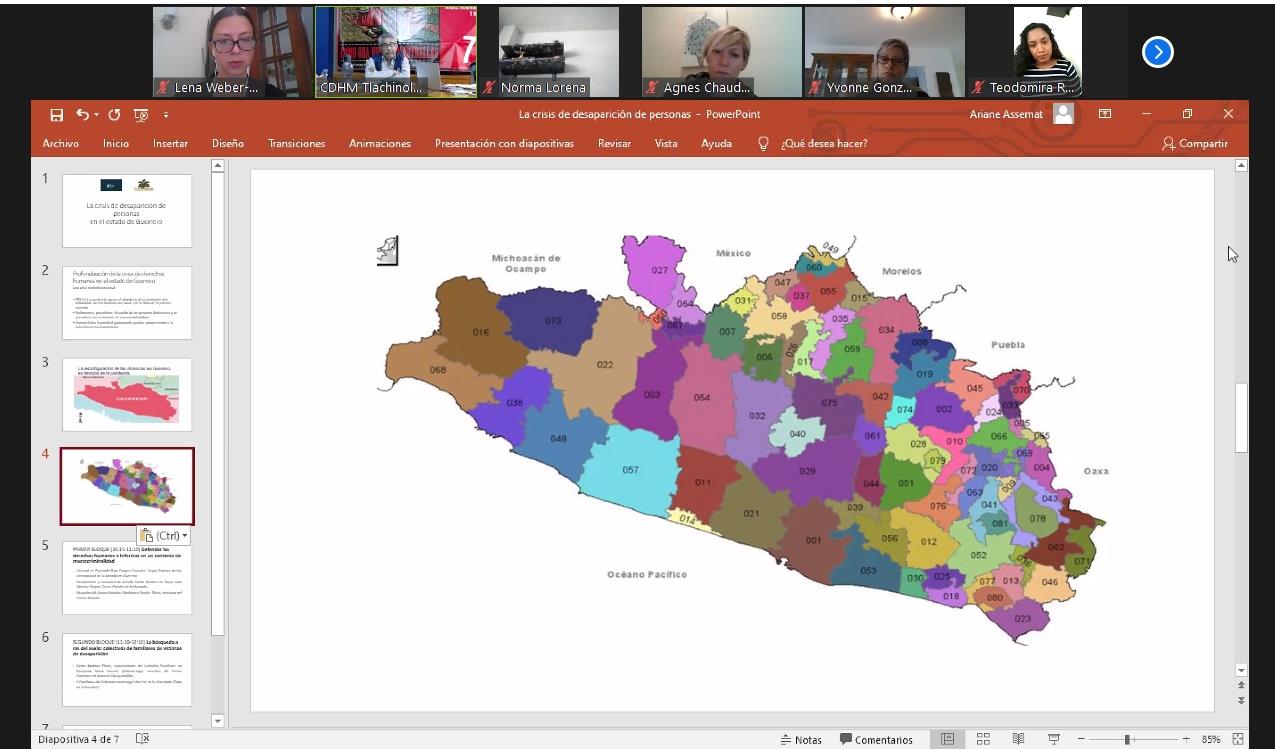