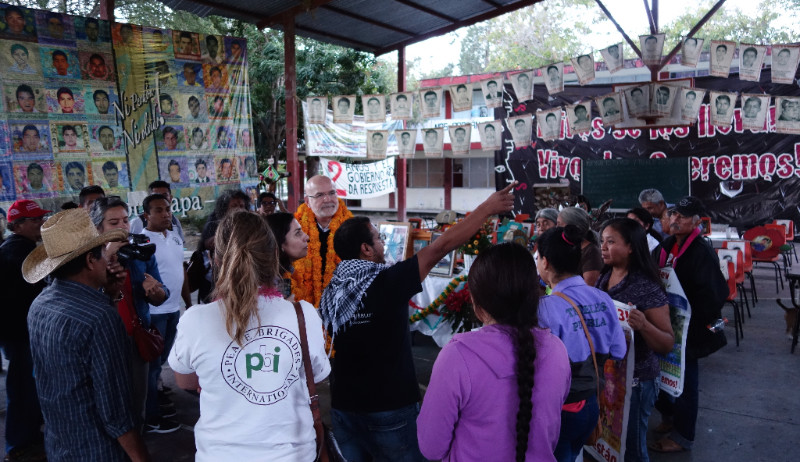 The second official visit of the Mechanism that monitors the precautionary measures granted to the students of the “Raul Isidro Burgos” rural school in Ayotzinapa (MC 409/14) and the recommendations of the Inter-Disciplinary Group of Independent Experts (GIEI) took place between 19 and 21 April 2017.

The goal of the visit was to supervise the investigation, the search for the disappeared, the integral attention to victims and relatives, and structural measures to guarantee non-repetition.

In a press release, the delegation shared the main advances that the Mexican State outlined and expressed their concern about the State´s failure to reach conclusions in the search for the victims and in clarifying the different lines of investigation that were highlighted by the GIEI.

The delegation met with relatives of the students and their representatives as well as with high level Mexican Government officials.

There were several observations made by the Commission's Team; they recognized the progress that was made with regard to the General Law to Investigate and Sanction Torture and Other Cruel, Inhumane or Degrading Treatment, which was recently approved by congress.

They also urged the Mexican state to “take decisive steps to create legislation around forced disappearance that complies with international human rights standards and has the backing of the families and organizations that accompany them.”

Several days after the visit, on 25 April, organizations such as the Tlachinollan Human rights Center and the Jose Maria Morelos y Pavon Regional Human Rights Center (both organizations accompanied by PBI) held a march to demand advances in the investigations of the Ayotzinapa cases - 31 months after the disappearance of the students.

Both organizations released a statement in which they reproached the treatment received by the families in the context of their acts to commemorate the events and demand justice, and they insisted on the need to examine the lines of investigation that were recommended by the GIEI and the IACHR's Special Mechanism to monitor the case.