Valentina Rosendo Cantú, indigenous me´phaa woman, originally from the community of Caxitepec, municipality of Acatepec in the high mountains of Guerrero, was victim of sexual torture by military members in 2002, a case in which the responsability of the Mexican State was decided by the Inter-American Court of Human Rights (IACHR) in August 2010.

PBI welcomes the fact that on 1st June 2018, 16 years after the event, the judge Iliana Fabrica Contreras Perales from the 7th District Court in the State of Guerrero emitted an historic guilty verdict against military members Nemesio Sierra García and Armando Pérez Abarca for the crimes of rape and tortue, sentencing the accused to 19 years 5 months and a day in prison and the payment of reparations for the damage caused to Valentina in the events that took place in 2002.

On 16th February 2002, whilst washing clothes in the community of Barranca de Bejuco, Valentina at 17 years of age was assaulted by 8 members of the army from the 41st Infantry Batallion who interrogated her about the whereabouts of armed people in the area.  When she did not respond, as she only spoke me´phaa, her indigenous language, she was tortured and raped by two of the soldiers whilst the other 6 watched.

Despite Valentina denouncing the attack straight away, the state and federal authoties refused to accept her declaration and she was never allowed a translator.  After a military assault against her and her community for having spoken out, Valentina´s husband left her, she suffered accusations from her community, social rejection and threats which eventually forced her to abandon her home with her three-month-old daughter.

The long road to justice

Valentina suffered multiple disriminations for being a woman, indigenous, poor, underage and because she spoke an indigenous language.  She was socially stigmatised for being a rape victim.  In her several attempts to claim justice, she was questioned about what she denounced, she was mistreated and re-victimised.  Her right to access medical services was denined, meaning her physical and mental health got worse as she lived through the aftermath of her trauma.

The civilian authorities allowed the case to be tried in military courts and although this decision was appealed, the appeal was not succesful.  The military tribunals decided not to attribute guilty verdicts against the soldiers and the case was closed.  Seven years later, Valentina took her case to the IACHR which emitted a sentence against the Mexican State in 2010, ordering Mexico to undertake 16 reparation measures, including the investigation of the events in a civilian court taking into account a gender and cultural diversity perspective in the identification, judgement and sentencing of those responsible.

After that the IACHR emitted three resoultions within the supervision process of the case; on 12th August 2012 it was notified that the case had been taken up by the Procuraduría General de la República (Public Prosecutors Office), an entity with which Valentina and the organisations supporting her including the Human Rights Center from the Tlachinollan Mountain, organisation accompanied by PBI since 2010, The Center for Justice and International Law (CEJIL) and the Miguel Agustin Pro Juárez Human Rights Centre, work closely. 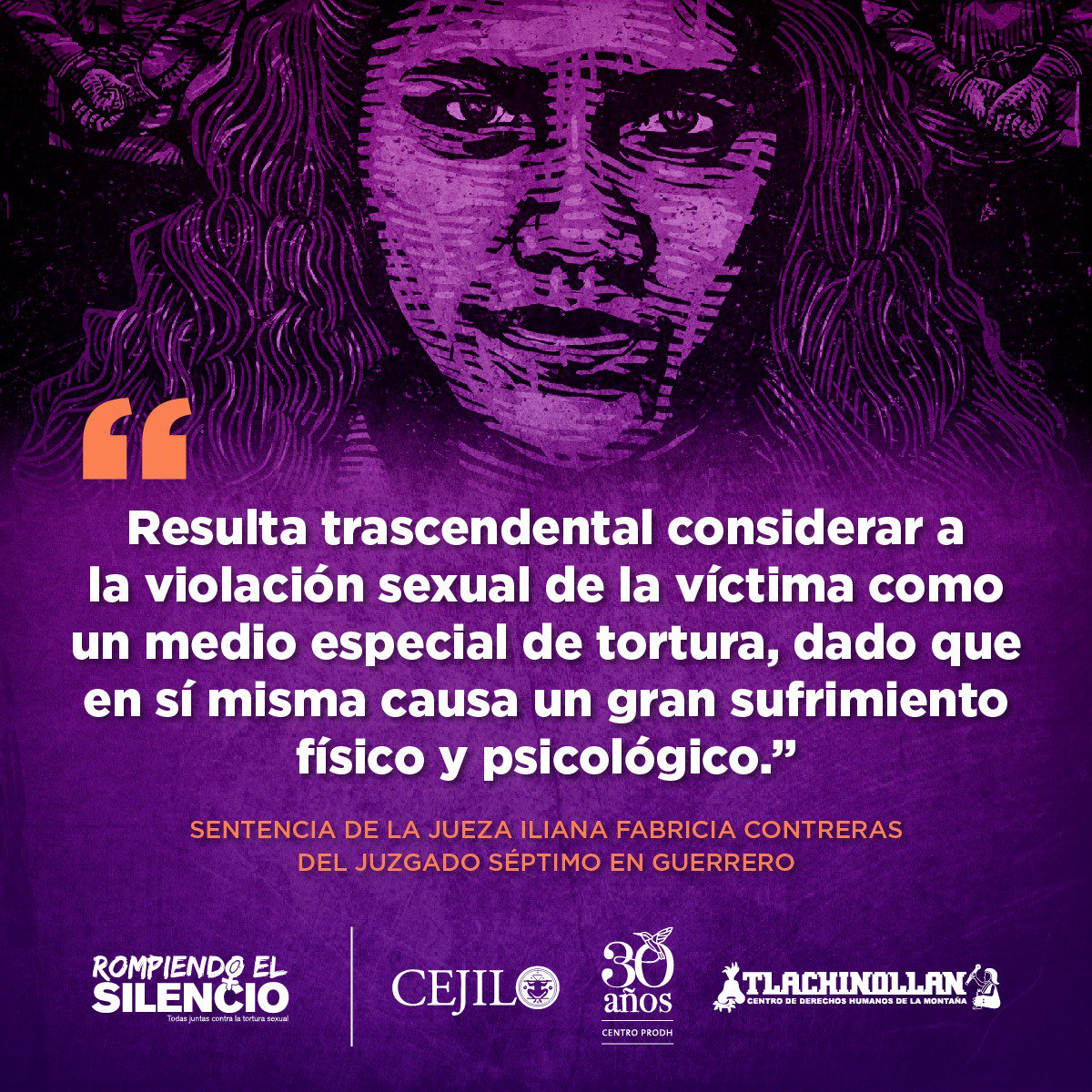 On 1st June 2018, a local court in Guerrero emitted a guilty verdict against the military members responsible for the rape and torture Valentina suffered.

Thanks to sentences such as that of the IACHR, Mexico modified it´s Military Justice Code in 2014, determining that civilian courts will investigate human rights violations committed by military members against civilians.

PBI celebrates the sentence emitted by the IACHR in 2010 and the guilty verdict emitted by the judge Iliana Fabricia Contreras Perales this year.  We recognise Valentina´s strength and persevearance in her struggle and defense of women´s rights and highlight the important accompaniment she has received from national and international organisations such as the Human Rights Center from the Tlachinollan Mountain.

This is a paradigmatic case on a national and international level as it recognises the testimony of the victim as a fundamental probatory element and signals that crimes of this nature often occur without the posibility of access to witnesses.  It sets a precedent for the development of the term "sexual torture" and "military institutional violence" and consolidates Valentina as a reference point in the defense of women´s rights to a live lives free of violence and the fight against sexual torture and impunity that in Mexico, according to the director of Amnesty International in Mexico, is at 98%, a statistic that proves the transcendence of this sentence.