Why do we need a binding treaty for Business and Human Rights?

The shifting nature of international power relations has meant that transnational companies often exercise greater power than governments across the world. The privileged position given to international investment in countries such as Mexico has resulted in the structural reforms that aim to attract this foreign capital to the detriment of the rights of communities to a clean environment and to be included in decisions around investments in their territories.

This trend can also be seen in the investment protection clauses in Free Trade Agreements, or the court cases initiated by powerful companies against governments who have legislated in favour of communities, affecting the profit margins of the companies. 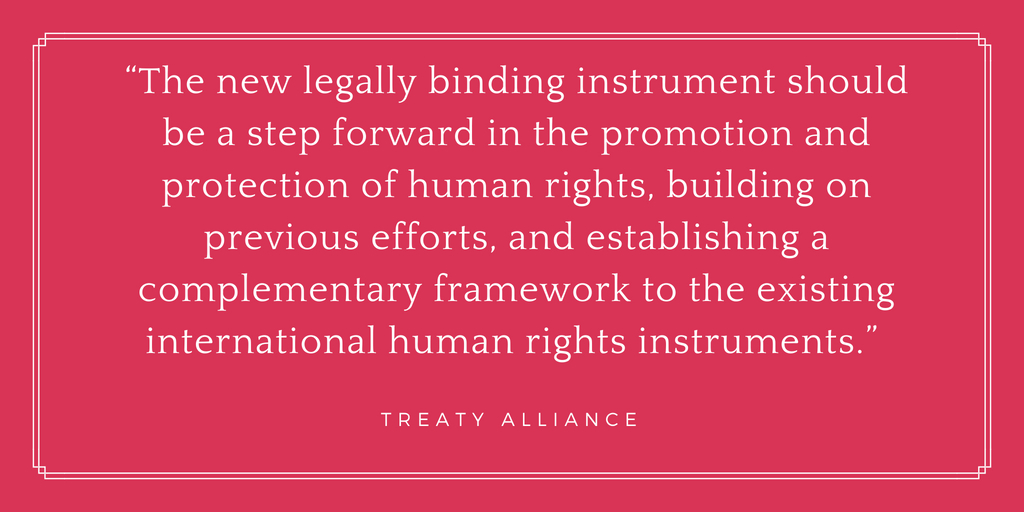 n this respect, civil society has been seeking ways to curtail corporate power and ensure robust international legislation is in place in order to protect people´s rights over economic interests. The Binding Treaty on Business and Human Rights, (offically called the “Legally Binding Instrument to Regulate, in International Human Rights Law, the Activities of Transnational Corporations and Other Business”) is one of these initiatives that pertains to ensure companies act through due diligence and minimise the environmental and human rights impacts of their projects in the territories they occupy. The prospect of an international Binding Treaty has been a controversial subject within the business and human rights field and has been a difficult topic to gain support from the private sector and many governments. However, due to the constant pressure from international civil society, despite the backlash, an international Binding Treaty is looking more and more likely. This October, a first draft ´Draft zero´ will be discussed among States in Geneva.

The past few years have seen a spike in attacks against land, territory and environmental defenders, as highlighted by numerous NGOs, including PBI, and representatives of international bodies such as the United Nations. These defenders are directly impacted by the lack of regulation of the international business sector and the imbalance between corporate power and the weak human rights protection mechanisms implemented by governments across the world. This scenario is particularly visibile in Mexico, which Global Witness labeled the 4th most dangerous country in the world to defend land, territory and the environment.

With this in mind, PBI supports the initiative of the Binding Treaty and advocates for the inclusion of specific clauses dedicated to the prevention of attacks against those defending their land against the threat of large-scale international investment, the protection of the rights of communities and individuals over the profit margins of companies and thorough environmental and human rights assessments to ensure minimal damage in the implementation of economic projects. PBI believes that a Binding Treaty has the possibility to contribute to greater accountability for companies in relation to human rights abuses and could potentially lead to greater protection of human rights defenders working on business and human rights cases throughout the world. 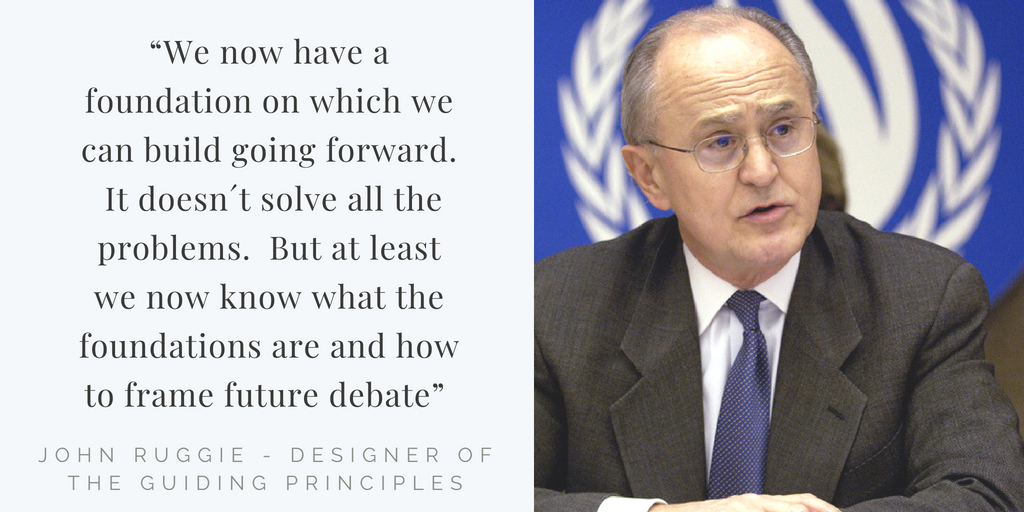 Other initiatives which go in a similar vein to the Binding Treaty are the UN Guiding Principles on Business and Human Rights and National Action Plans. Given that companies do not have the same legal duties as States under international law, there has been a long-standing debate about what responsibilities companies do have for human rights. The Guiding Principles were developed to clarify the different roles and responsibilities that States and companies have to address business impact on human rights. Namely the State duty to protect human rights and regulate accordingly, companies’ responsibility to ensure their activity is not violating human rights and the need for victims to access remedies.

Although they are useful tools to encourage companies to respect, protect and promote human rights, the Guiding Principles are not compulsory and there is no governing body in charge of assuring their implementation, meaning neither States nor companies are obliged to comply with them. After 7 years of the Guiding Principles being in force, PBI has not witnessed an improvement in the situation of risk for human rights defenders on the ground; on the contrary, there has been a spike in attacks against land, territory and environmental defenders, indicating that the implementation of the Guiding Principles, mainly through voluntary codes of conduct, has not had the desired affect and that further action may be required.

The UN Working Group on Business and Human Rights strongly encouraged all States to develop, enact and update a National Action Plan on Business and Human Rights as part of the State responsibility to disseminate and implement the Guiding Principles. Again, the National Action Plans are useful in highlighting the issue of business and human rights and encouraging States to regulate corporate activity, however it is felt by many civil society organisations that these instruments are not enough and that without a Binding Treaty that sanctions those who don´t comply, true change in the sector will be difficult to achieve. 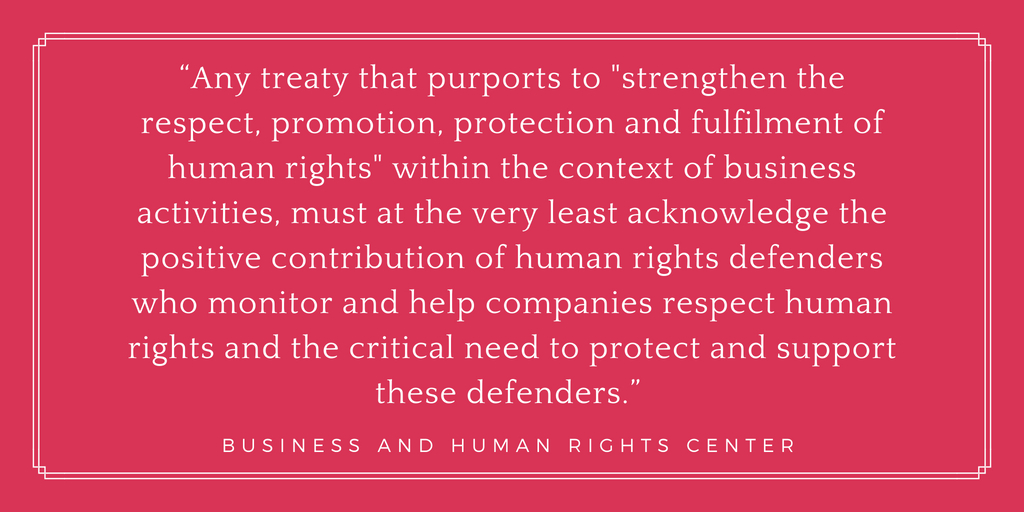 As signalled by the Business and Human Rights Center, it is essential that international civil society, especially communities and orgnisations affected by international investment projects, can participate actively in the design of this treaty to ensure their perspectives are reflected and voices heard. There are several groups of organisations that have come together in order to exercise greater pressure on the States involved in the passing of the Binding Treaty. These include the Economic, Social and Cultural Rights Network, Feminists for a Binding Treaty and the Treaty Alliance.

PBI has monitored developments and participated in meetings of the Treaty Alliance which is made up of a large group of civil society campaigns, networks, social movements and organizations from around the world in support of a binding treaty. In Mexico PBI accompanies the Focal Group on Business and Human Rights, a collective of NGOs who work to guarantee the respect, promotion and protection of human rights by States and national and transnational corporations.