Thousands have had to abandon their homes as a result of, or in order to avoid the violence caused by armed conflict in Mexico

Forced displacement: neither recognised nor addressed in Chihuahua 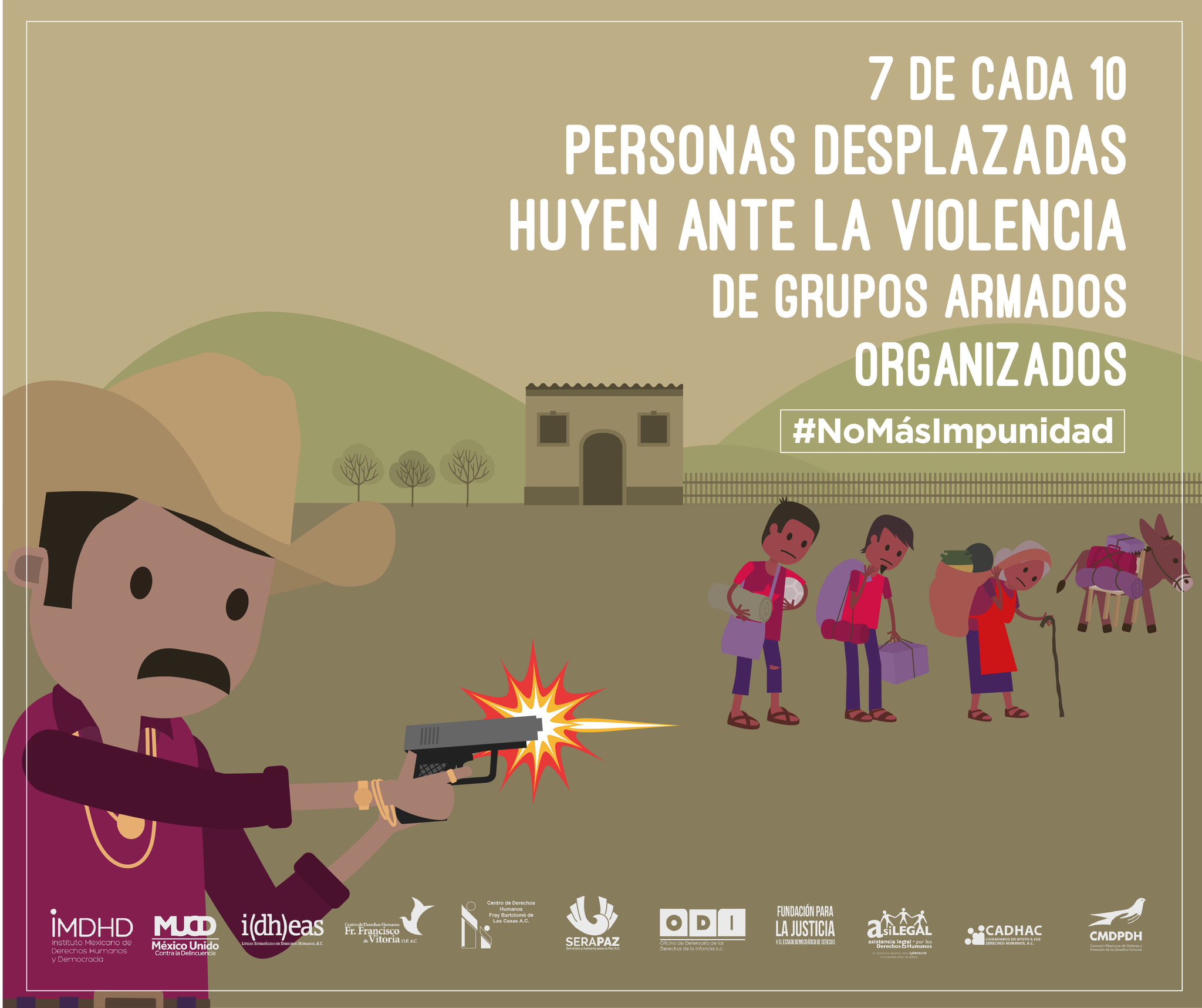 Internal forced displacement continues to be unrecognised and unattended in Mexico. In the 2017 report “Episodes of mass internal forced displacement in Mexico”, the Mexican Commission for the Defense and Promotion of Human Rights highlight that “In Mexico tens of thousands of people are forced to abandon their homes as a reactive or preventative measure to avoid being victims of the violence and risk that exists all over the country. Facing the terror of increased violence that could result in fatal consequences, they are forced to take extreme measures to escape and leave everything behind. If they don´t, their lives and those of their families could be in serious danger”. They highlight Chihuahua as one of the states with most episodes of internal forced displacement in the country.

At the beginning of the month of September during the visit of the UN Special Rapporteur on the human rights of internally displaced people, Cecilia Jiménez-Damary, civil society organisations from the state of Chihuahua had the opportunity to share the concerning situation that internally displaced people find themselves in in the state and the causes behind the phenomenon. The rapporteur met twice with organisations and victims and had the opportunity to visit Babaorigame, in the Municipality of Guadalupe and Calvo in the Sierra Tarahumara, where she heard first-hand testimonies from victims. She undertook this visit with the Alianza Sierra Madre A.C (ASMAC), organisation accompanied by PBI, that in turn accompanies communities in the municipality as they demand protection for their human rights. Within this work ASMAC accompanies victims of internal displacement, also the members of the organisation are victims themselves of the phenomenon which has a direct impact on their human rights defense work. 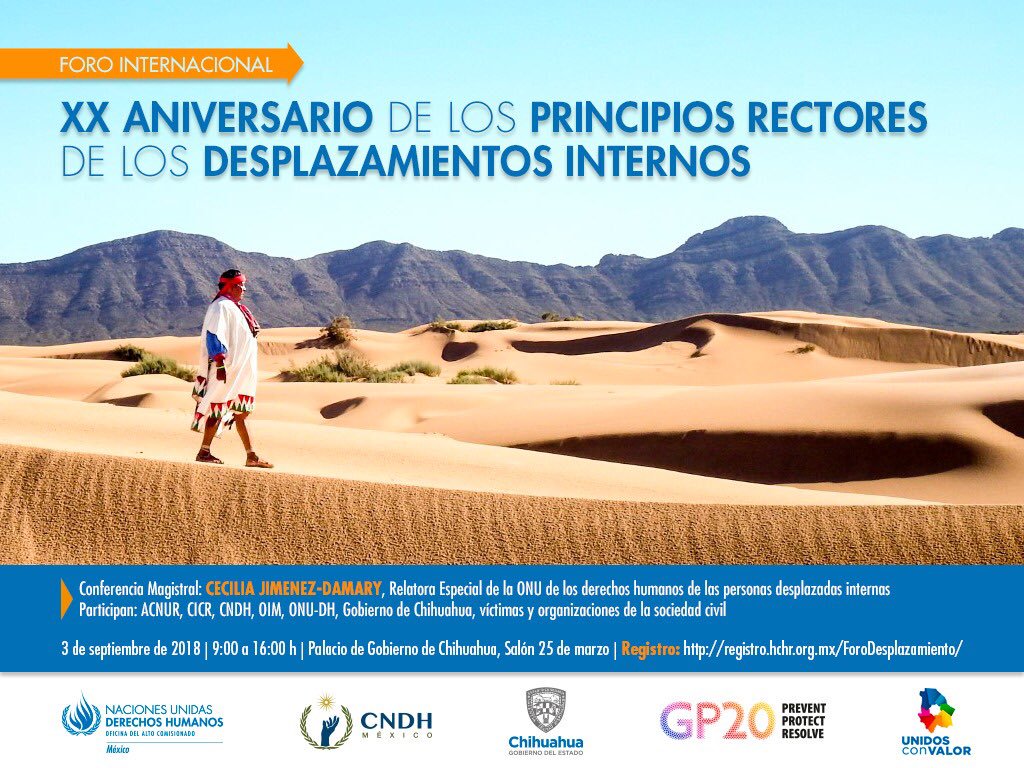 On 3rd September PBI´s Northern team was present in the Government Palace of Chihuahua during the International Forum celebrating the 20th Anniversary of the Guiding Principles on Internal Displacement. The forum took place within the framework of the Rapporteur´s visit, who was invited by the state of Chihuahua. The forum was organised between the Office of the High Commissioner for Human Rights and governmental authorities such as the Executive Commission for Attention to Victims (CEAV), the State Commission on Indigenous Peoples as well as the National Human Rights Commission. There was a strong participation from state authorities with the presence of Governor Javier Corral Jurado and Prosecutor Cesar Peniche Espejel amongst others. On the international level, representatives from the UN, the International Committee of the Red Cross as well as other international experts attended.

Throughout the forum civil society organisations and victims of forced displacement shared their concerns with the state authorities and international community. According to the Mexican Commission on Human Rights Defense and Promotion, in December 2017 329,917 people were registered as internally displaced in Mexico with Chihuahua one of the 12 states with most cases of the phenomenon. In the context of Chihuahua in 2017 there were three large-scale displacements in two municipalities of the Sierra Tarahumara (Guadalupe and Clavo and Madera).

The week before the forum, victims of forced displacement, accompanied by the CEAV, members of the security forces of the Public Prosecutors Office and members of two organisations of human rights defenders, CEDEHM and CONTEC, visited the community El Manzano in the municipality of Urique/Uruachi. According to the article “Forced displacement continues in the Sierra Tarahumara”, by the journalist from Chihuahua, Particia Mayorga; who herself is a victim of forced displacement due to the high risk her work brings with it in the State, this visit provoked the killing of two people in the Sierra Tarahumara (Monterde community). This highlights that Chihuahua continues to be an area of high risk for both victims of forced displacement and those defending their rights.

The Governor manifested political will to address the problem through several committments, including the creation of public policies from a state level diagnostic to holistically address the needs of displaced people and the establishing a security protocol for safe and voluntary return.

The Rapporteur manifested the need to affront the problem in a joint manner with federal authorities with the aim to request an official visit from the Federal Mexican Government next year so that the phenomenon is officially recognised on a national level. PBI expresses concern for the situation of those internally displaced in the state of Chihuahua and highlights the negative impact of the phenomenon on human rights defense work.