It is not easy to explain what 20 years of work mean for Peace Brigades International's Project in Mexico. Many metaphors came to mind when we tried: People crossing paths, stories, dialogues, jobs, will, heart and emotions which interlace between human rights defenders --the heart of this project-- and the sea of volunteers who have given and continue to give life to the project. Words turn to threads which weave dialogue, dialogue which is threaded in accompaniment, an exchange which stretches vertically and horizontally to form a network. In the moments and places woven daily from different sets of knowledge and capacities, by different people, who are the threats forming a great plot which, at this stage, allows us to declare that, even though in Mexico danger is a constant shadow upon those who have decided to put a stop to inhumanity and to defend rights, if individual wills are added up one can create a web which brings support, comfort, wherein to put forth the whole body, a head, a heart, legs, arms and emotions, to open up the spaces which are needed for peace.

"To weave is to devise, to fabricate, to conceive a function and beauty from the simplest of elements", writes Virginia Postrel, making us think of the beautiful dignity that has been built between so many human rights defenders and volunteers through the decades. In how, on the basis of intertwined word and trust, protection, care, security and a two-way path are born; in how an embrace requires two people to happen. Because thinking of weaving is thinking of cooperating, in the sum which is required to give it form and feeling. Even though the start of a woven cloth is the crossing of two strands, the capable weavers can combine colors, shapes, types of thread, complex techniques. Our daily task is similar in its finesse, but mainly because it is dedicated work, a calculated task, a committed body devoted to embracing and partnering.

Truth be told, this is a delayed celebration, one which had to wait because the world has been on pause for almost two years. It is impossible to go forth without mentioning the challenge faced by PBI, an organization which bases its work on physical accompaniment. Worried about how ours and everybody else's lives was disrupted, we had to launch ourselves from afar, with more strength and creativity than ever, because we learnt that the world only partially paused. In Mexico, the danger, the resource-depleting 'megaprojects' , the dispossession, the disappearances, the attacks on women, sexually diverse people or migrants and other rights violations continued. We also saw how, in the midst of such delicate issues, lied people committed to the defense of human rights. 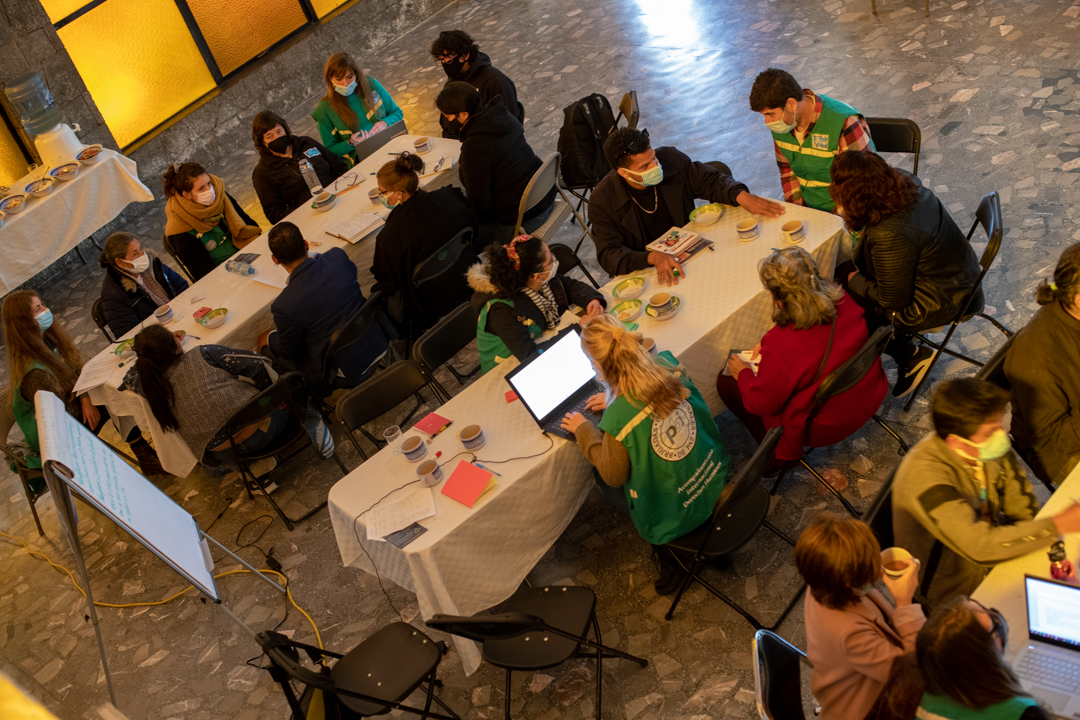 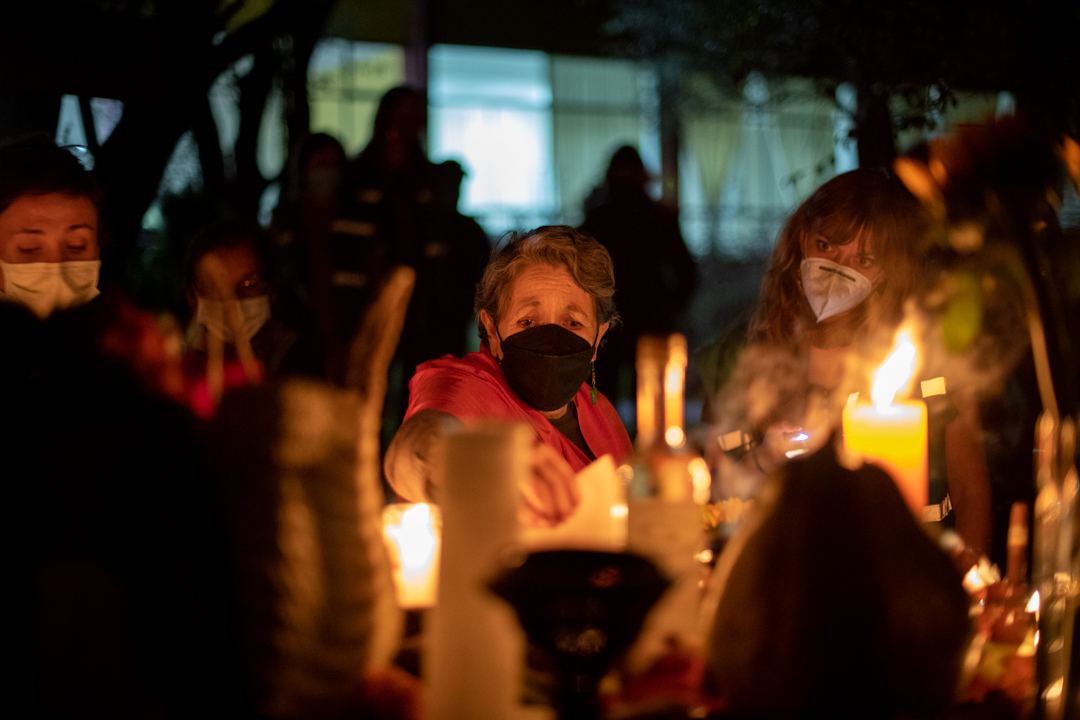 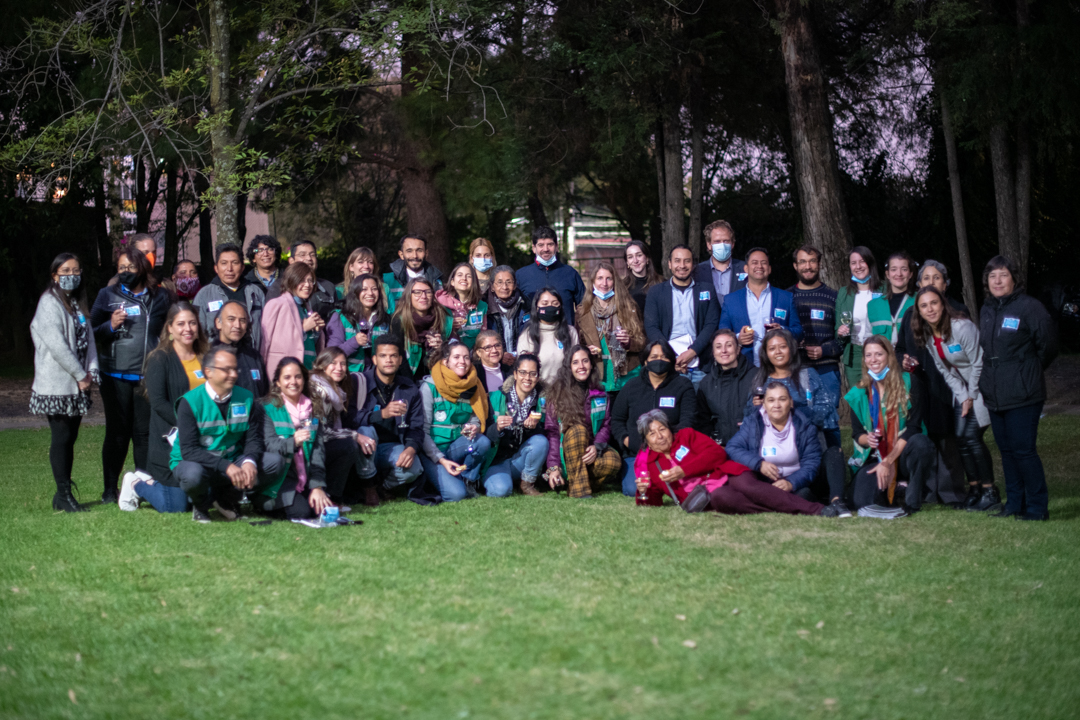 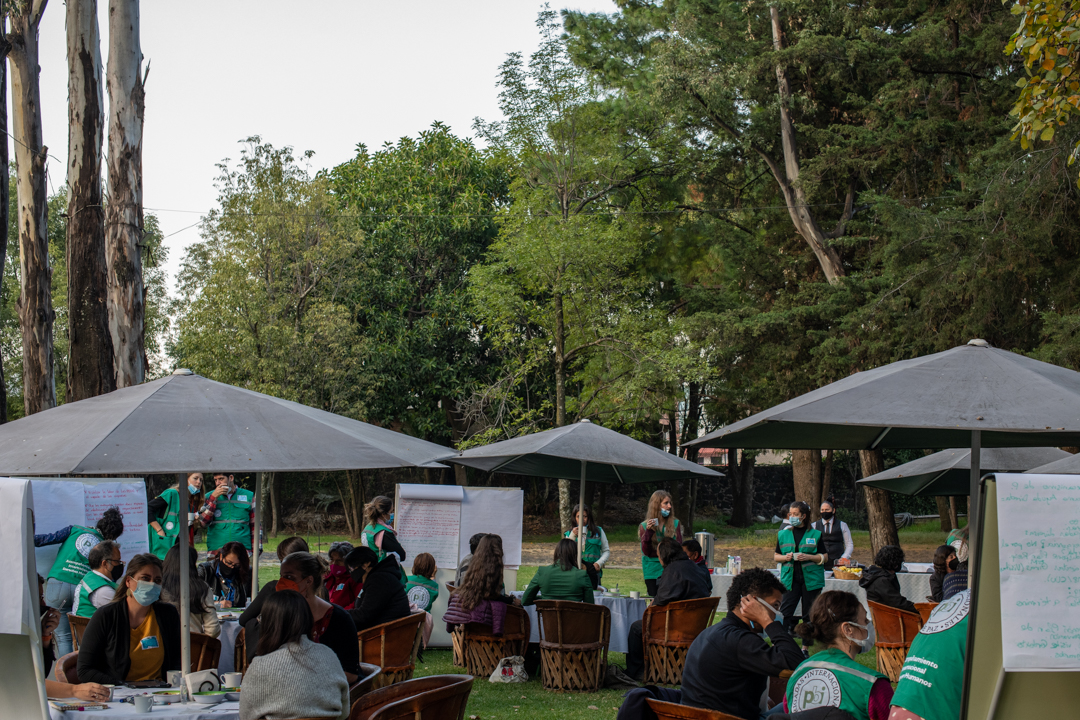 Here, we reflected and pondered on what it is that we do, what our return to the field would look like, where accompaniment and rebuilding was needed. In this path that we're still designing, we also meditated on how the meaning of the word care must be extended, because we also wish to declare that radical tenderness is fundamental to offer support, that enormous amounts of resilience are needed to function, to walk despite adversity and distance. This mandatory pause turned into an opportunity to rethink, to reposition ourselves: pausing to walk again.

Thus, we summoned ourselves at the first chance we got, to see each other's faces and bodies beyond the screen, in order to set up not just a work space, but a space for exchanging, for laughing and chatting through coffee and biscuits, to reclaim that which is transmitted only through arms, eyes and bodies, in relaxed small talk, for this thread is fundamental in our weaving, we don't just build ourselves up seating at a desk or talking to one screen and another screen, but also through emotion and reflection that sneaks through in sharing a space. The reunion was wonderful, there was so much life and dignity in a single room, so many excitement to be once again reunited with people battling such different struggles and facing such different paths, who have crossed paths with the accompaniment of PBI, with the solidarity of so many people throughout these 20 years. Before we begun, we brought with us those who were taken from us during that time, both by the pandemic or by murder because of their work. We met around them, lit a candle, brought their presence forth, because their memory also embraces those who continue their struggle, because as defender from the Guerrero mountains Abel Barrera says, they are part of the "dream of humanity: equality, justice, respect for human rights". 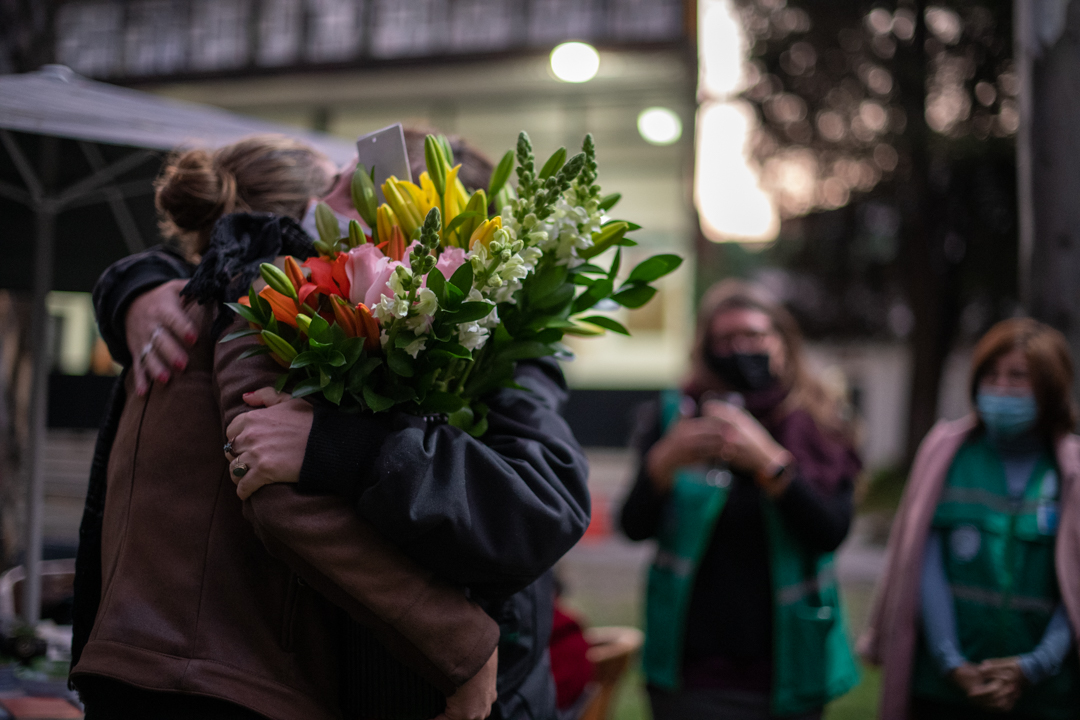 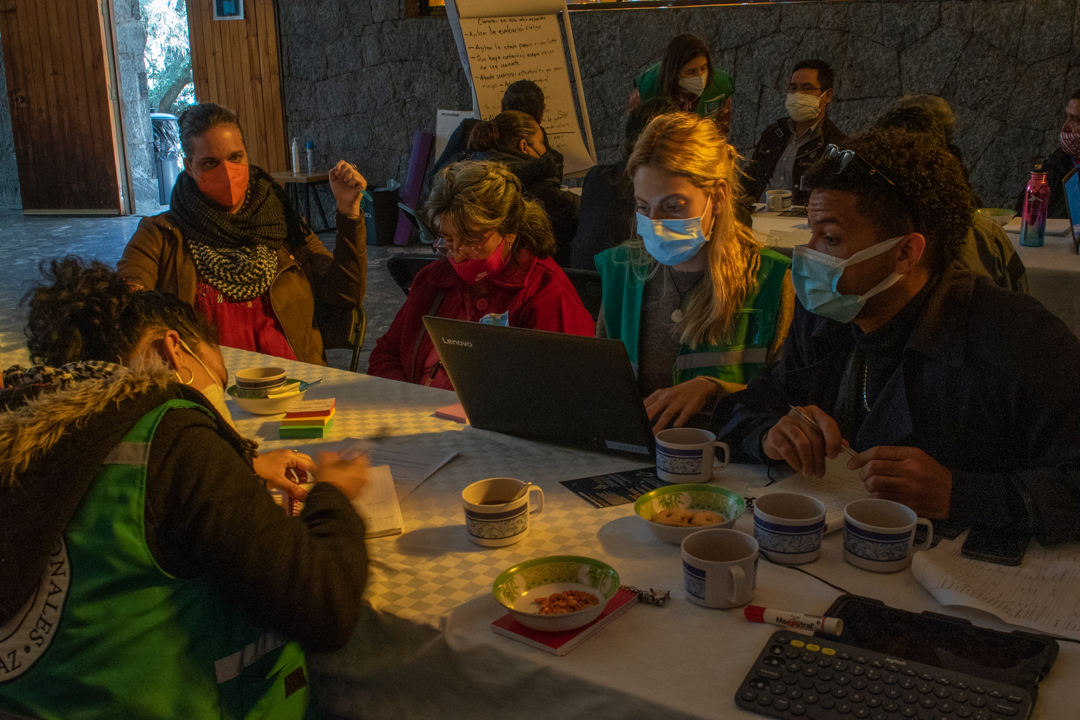 The rights defenders we invited came from many different places, they met each other and reunited with each other, collectively reflecting, we found many common questions coming from different latitudes, we saw how during this time of distancing, many common experiences arose, how more than one head nodded in agreement when listening to experiences from here and there, how deep those stories resonated. Then, from this point, little by little a clearer vision was forming about what rights defenders face in their daily struggles: impunity, lack of will of the State to resolve issues at their root, the factual interests and powers hampering their advancement and perpetuating abuse, the lack of safety before risks, the closing of dialogue spaces with authorities and the State at different levels, though mainly at the federal level.

We also managed to organize a conversation between representatives of the diplomatic corps of Canada, the United Kingdom, France, Switzerland, Sweden and Norway and the rights defenders from varied places and contexts such as the Chihuahua mountain range, the Guerrero coast, the valley of Puebla, the heart of Oaxaca, the northern border. The opportunity to dialogue in small groups resulted in such a valuable exchange that slowly but soon enough, we hope to see flourish throughout the territories where danger prevails, where international solidarity could make a difference.

Martín Beristain would sometimes write in his journals in El Salvador and Guatemala: "there we go, from hope to hopelessness and back", and in these times when uncertainty still dominates much of daily life, from the Mexico Project of Peace Brigades International we try to work from the former, but we can't ignore what's at stake. Embracing also means accepting that one might feel worry and a shrunken heart every time we speak with rights defenders about risks and dangers they might face and we seek to build spaces for peace for the long haul. For this reason we continue to reflect on which threads to baste and how we will intersect them with rights defenders, with our support network, with international solidarity. With the many paths and spaces where we could and will continue to be present in such a complex country where we need to continue weaving with strategy, intelligence, constant work, care, commitment, radical tenderness, patience and much love. That is, perhaps, the first lesson after 20 years. 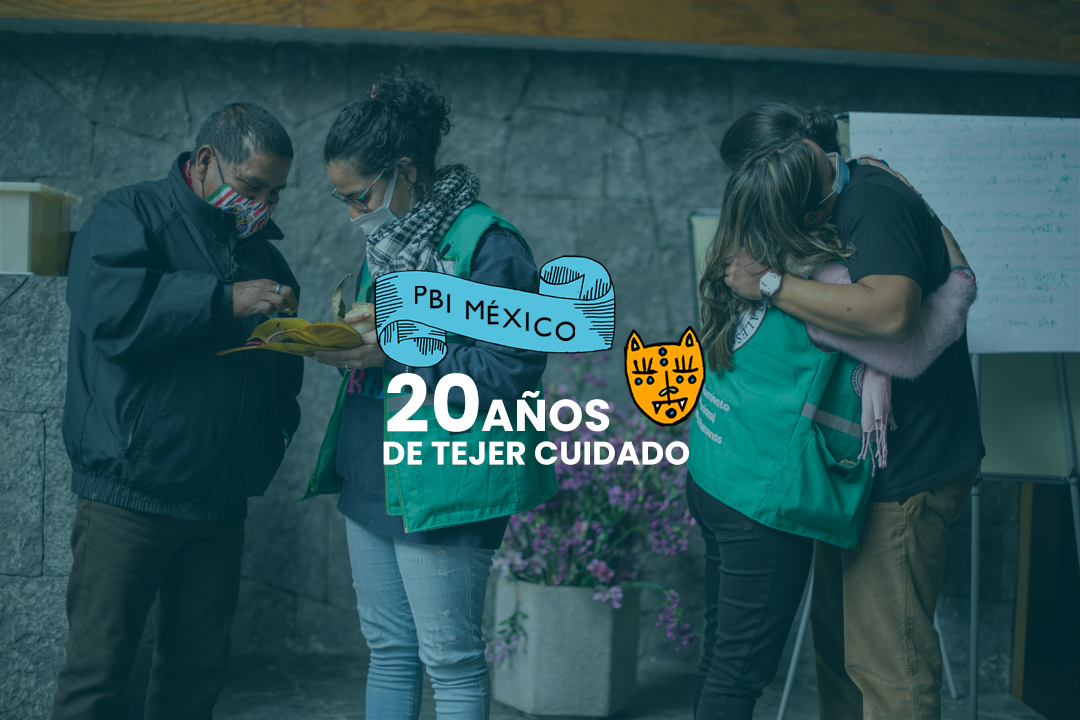 You can also join us in continuing to weave care networks for human rights defenders, so that we can continue to open spaces for peace. You can make a donation here: