"We oppose development that reduces our forests, that destroys our lands" (...) With the pandemic we will have to live the rest of our lives. " 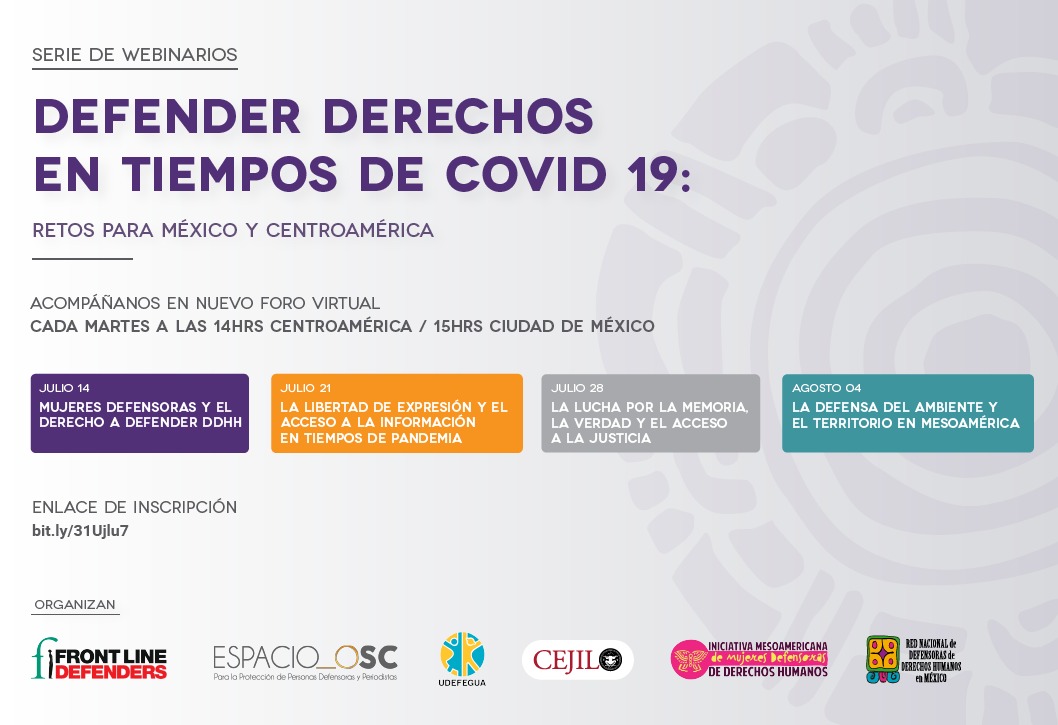 In an article (Spanish only) published in ElFaro.net portal, Guillermo Rodríguez from the Center for Justice and International Law (CEJIL), highlights that “in Latin America the covid-19 pandemic has aggravated existing structural problems. Its social and economic impact has accumulated and deepened inequalities and unresolved historical debts”. Rodríguez emphasizes that "in times in which all States have been in some way surpassed, the role of defenders is essential to help construction and identification of alternatives in democracy and responses with a human rights approach”.

This panorama, identified and pointed out by several civil society organizations in the Latin American region, has led to generating instances of exchange and dialogue, among which we want to highlight the series of virtual seminars Defending rights in times of COVID 19. Starting in July, Espacio OSC, accompanied by PBI México, CEJIL, Front Line Defenders, The National Network of Women Human Rights Defenders of Mexico, IM-Defensoras and Udefegua, came together to organize and summon more than 20 human rights defenders and journalists of the region in this series of virtual dialogues, to talk about what it has meant to continue defending human rights and journalistic practice during the context of a health emergency.

Every Tuesday, during 5 sessions, challenges for the defense of human rights in the context of the pandemic were discussed, more specifically, fundamental themes such as freedom of expression, memory, truth and access to justice, women human rights defenders, the defense of land, territory and the environment, and labor rights and trade unionism.

In general, participants of the virtual dialogues agreed that the pandemic has altered and transformed the way in which the defense of human rights is carried out1. It is clear that the difficulties and limitations existed before the health emergency, however, this situation has made it easier, among other things, for governments to make invisible the demands of human rights defenders, as well as it has become increasingly evident the little response from the States: "in general, they continue to not recognize the relevance of the defense of human rights, even in times as critical as the ones we live in"2.

In the particular case of Mexico, Espacio OSC points out that in addition to the context of generalized violence in the country, it is worrying that during the period of the pandemic measures have been adopted with negative impacts on the work of defense of human rights and information. The articulation of civil society organizations highlights the case of austerity policies, “among which a 75% budget cut is contemplated for the operating expenses of the entire federal public administration; the weakening of institutions responsible for guaranteeing and defending human rights, such as the CNDH itself, the CEAV and CONAPRED; the militarization through the Agreement that has the permanent Armed Forces for public security tasks, as well as the continuation of extractive projects as a strategy for economic recovery, to the detriment of communities that defend their territories such as the Mayan Train and the Trans-isthmian Corridor on the Isthmus of Tehuantepec3.

In this regard, it is also worth noting that in the framework of the 176th Regular Period of Sessions of the Inter-American Commission on Human Rights (IACHR), the National Network of Women Human Rights Defenders in Mexico, the Mesoamerican Initiative of Women Human Rights Defenders, Front Line Defenders, Espacio OSC and CEJIL, held a meeting with Commissioner Esmeralda Arosemena de Troitiño, in which they mentioned that the risk situation faced by people who defend human rights in Mexico has worsened as a result of the measures of attention to the pandemic implemented by the Federal Government, the states and the municipal authorities in the face of the COVID-19 pandemic. In particular, they referred to the situation of women defenders and the LGBTIQ + population; as well as defenders of the land and territory, criminalized defenders and those imprisoned, of those who accompany the migrant population, to the risks faced by journalists and communicators; and the situation of relatives of disappeared persons or victims of human rights violations4.

PBI Mexico expresses concern about the increase in attacks and limitations against human rights defenders and journalists 5 months after the declaration of the health emergency in Mexico. Given the uncertainty we are all going through, we reiterate the importance of guaranteeing the defense of defenders, and we consider that if they do not have enough space and sufficient security guarantees to be able to promote social changes, the assurance of rule of law and a full democracy will be strongly compromised.

Watch the broadcasts of the virtual seminars again at the following links: